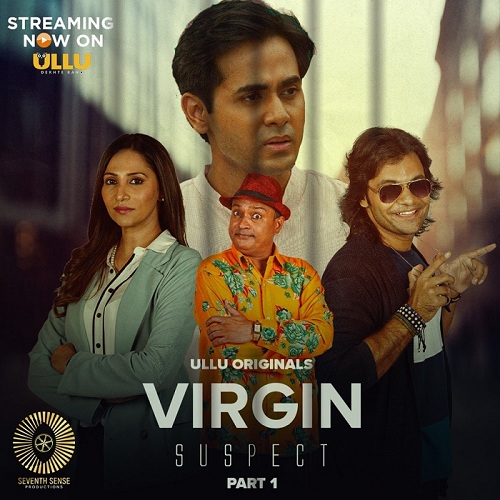 Virgin Suspect is a two part web-series, with roles being played by some of the most accomplished and talented actors in the industry. The story, screenplay and dialogues have been written by Rajeev Mendiratta, with Vivek Mishra and Satish Harde as the producers.

A riveting tale filled with humor, this interesting web-series revolves around Chandan, played by the famous actor, Randeep Rai. Chandan is a brilliant student, having a disciplined life being looked upto by everyone.

Suddenly, his life takes a turn when he is arrested on charges of rape. The story takes more twists and turns and the entire neighborhood and Chandan’s parents are shocked on this serious crime. Although Chandan has no past criminal record, the evidence seems to be pointing right at him.

Chandan’s Friends Sunny, played by Aman Jaitly, comes to his aid with the help of his lawyer Shanaya, played by the beautiful Rishina Kandhari.

The plot takes another interesting turn here when Chandan’s secrets regarding his emotional and physical relationship with his girlfriend, Ginny played by Vedika Bhandari, get slowly uncovered. The noted comedian Rajeev Nigam’s comic timing is the cherry on the cake.

“Virgin Suspect is a beautifully made web series. It is gripping, it has suspense and is a complete thriller. Every actor has performed well and especially with the charming Randeep Rai who is a favourite amongst the youth and a content creator playing the protagonist, it has given our platform a lot of buzz” says Vibhu Agarwal, CEO – ULLU Digital “He is apt for the role, perfectly casted. Such stories keep our audiences on edge. And our audience has accepted this series.”

A series that is full of suspense, comedy, and a totally unexpected end to Season 1. Viewers will find themselves constantly engaged through unexpected turns and laughter through the entire Season 1, making it a web-series that is not to be missed.

Director Rajeev Mendiratta says “Virgin Suspect is one of those rare suspense stories which is layered with a lot of comedy, so that the audience actually enjoys the Suspense. The Story not only holds you and keeps you on the edge of your seat but also makes you laugh throughout”. He adds “It was a script which needed the backing of a production house which understands the contemporary content and with Seventh Sense Productions I found that”

It comes across as a series that is entertaining, yet realistic, sometimes comic, sometimes dramatic. It is a story of suspense, comedy and a gripping end.

Part 1 of the entire series is now streaming on Ullu app. The interesting storyline, coupled with talented screenplay and dialogues makes Virgin Suspect a binge-watch adventure to be thoroughly enjoyed.