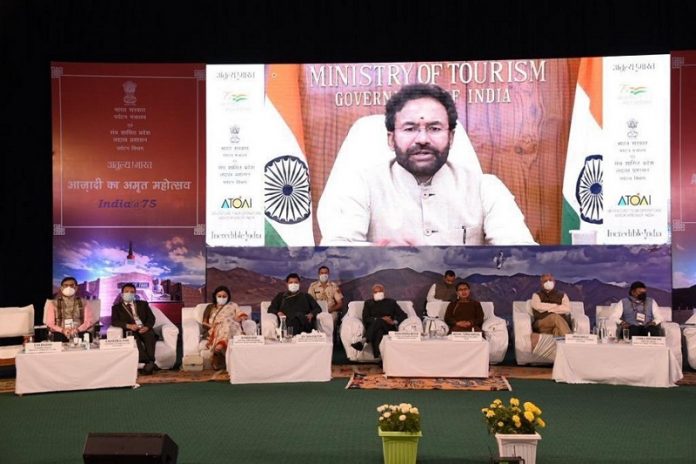 (NewswireOnline):- “Ladakh : New Start New Goals” event organised by the  Ministry of Tourism, Govt. of India in collaboration with Department of Tourism, Administration of Union Territory of Ladakh and Adventure Tour Operators Association of India (ATOAI) was inaugurated  at Sindhu Sanskriti Auditorium, Leh, today on the 26th August 2021.

The event was started with the opening remarks by Smt. Rupinder Brar, Additional Director General, Ministry of Tourism, Government of India followed by unveiling of “A Tourism Vision for Ladakh” document which focuses on overall development of the Ladakh Region.

Shri Mehboob Ali, Secretary (Tourism), Administration of Union Territory of Ladakh addressed the event emphasising on the overall development of Ladakh and to tap the potential of Ladakh in Tourism sector. Shri Umang Narula, Advisor to Hon’ble Lt. Governor Admn. of UT of Ladakh addressed the event where he thanked the Ministry of Tourism for framing the comprehensive tourism vision document for Ladakh. He also shared the starting of  E buses in Leh on certain tourism circuits.

Shri Arvind Singh, Secretary, Ministry of Tourism, Government of India addressed the event virtually. Shri Singh spoke the objective and aim of the event from the perspective of Ladakh and how the event hoping to provide indigenous product knowledge to the industry stakeholders and also a platform to local stakeholders for interaction with the Tour Operators / buyers from the rest of the country.

Shri. G. Kamala Vardhan Rao, Director General, Ministry of Tourism emphasised balanced growth of the ladakh region with careful planning on sustainable and responsible tourism. He also stressed on preventing mass tourism in Ladakh region by giving an example of tourism in Alps region in Europe.

Hon’ble Member of Parliament, Ladakh,  Shri Jamyang Tsering Namgyal thanked the Ministry of Tourism for conducting the event LADAKH: NEW START NEW GOALS and hopeful that this event would help to boost tourism and economy in Ladakh . He also shared his vision of projecting Ladakh as a year-round destination for tourism and also emphasised the potentiality of winter tourism and winter sports in Ladakh. He stressed on conducting Zanskar winter tourism festival and winter sports festival for a duration of one month and also urged to boost tourism in Kargil.

Advocate Tashi Gyalson, Chairman, Ladakh Autonomous Hill Development Council, Leh mentioned the dependency of Ladakh economy on the tourism sector. He also appealed the all the stakeholders to promote overall Ladakh and not restrict its potentiality by promoting particular sectors.

The Chief Guest of the event Shri Radha Krishna Mathur, Hon’ble Lieutenant Governor, Administration of UT of Ladakh spoke about the new tourism products that Ladakh can offer to the visitors such as Winter Tourism, Science based tourism etc. The cultural and heritage tourism has enormous potential in Ladakh to offer to its visitors. He also mentioned about the carbon neutral path for Ladakh that is being followed. He was happy to mention that Buddhist Chanting has been identified by the UNESCO as intangible cultural heritage of Ladakh. He appreciated Ministry of Tourism for organising this event.

Keynote address was delivered virtually by Shri G. Kishan Reddy Hon’ble Union Minister of Tourism, Culture and Development of North Eastern Region (DoNER).  Shri Reddy spoke about Tourism in Ladakh has seen immense growth in the last 40 years. Ladakh is the ‘Land of High Passes’, that has something to offer to every tourist from bliss of natural beauty to adventure opportunities for trekkers, bikers, cyclist, climbers etc. At the same, the monasteries of Hemis, Alchi, Thiksay make Ladakh a cultural and heritage hub. Union Minister also mentioned that to leverage the huge tourism potential of Ladakh, the Tourism Ministry has launched ‘Ladakh: New Start New Goals’ program and this is a platform that provides tour operators from other parts of the country and customers to interact with local stakeholders from Ladakh. He further added that Tourism Ministry has also prepared ‘Ladakh Vision Document’ where all matters related to the development of Tourism in Ladakh are discussed in detail. The Central government has also contributed Rs.23.21 Crore for Tourist, Water Screen Projection Multimedia show and other tourist attractions and also developing Chaukihang Vihara Project under the PRASHAD scheme.  He expressed his belief that in places like Ladakh for tourism to develop the community partnership is very important. He stressed on need to develop overall tourism development with focussing on creating a professional skilled workforce. Minister stated that Tourism is one of the largest job creators in India. The Prime Minister has named Tourism as one of the 12 Champion sectors in the services Industry .

Shri Gyan Bhushan, Economic Advisor, Ministry of Tourism gave the vote of thanks to end the inaugural session.

GovernEye publishes results of its opinion poll surveys for Goa, Manipur, Punjab, Uttar Pradesh and Uttarakhand; Assesses which responses were emotional and which analytical