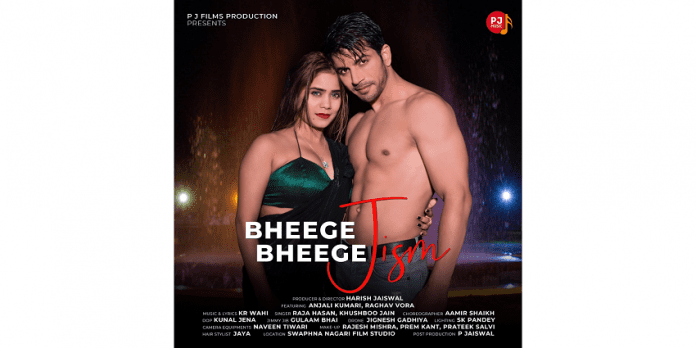 Anjali Kumari has delighted her fans again with her hot and bold dance moves with co-artist Raghav Vohra. The two can be seen sharing chemistry in this beautiful romantic song sung by popular singers Raja Hasan and Khushboo Jain. The music and lyrics are composed by KR Wahi aka Karan Wahi. Kunal Jena is the cinematographer whereas Choreographer Aamir Shaikh has created some amazing moves that are sure to go viral on social media.

Harish Jaiswal, the founder of P J Music and P J Films Production, has produced and directed this song. When pressed for his opinion on the song, he simply says- “Bheege Bheege Jism” is a song about the first kiss in a relationship, which my artists, Anjali Kumari and Raghav Vohra, have rendered beautifully. The audience loves this, which can be seen in our previous hit songs, “Katra Katra Again” and “Aa Bhi Ja.” Raja Hasan and Khushboo Jain are the perfect voices for this song. I am so proud of everyone, my crew team, singers, and audiences – after all the hard work, we’re finally getting into a good rhythm and working continuously on upcoming music videos. Let’s keep it up and make this the best song ever for the fans!”

The song is available on all leading audio sites JioSaavn, Gaana, Apple Music, Prime Music, Spotify, and Resso to name a few. The official music video is available on P J Music Label’s Youtube channel. Watch here –https://youtu.be/byWLif_kYJU. Let’s congratulate the team and show our support to make this song a chartbuster!

Avatar 2 release date, cast, trailer and all you need to know about The Way of Water