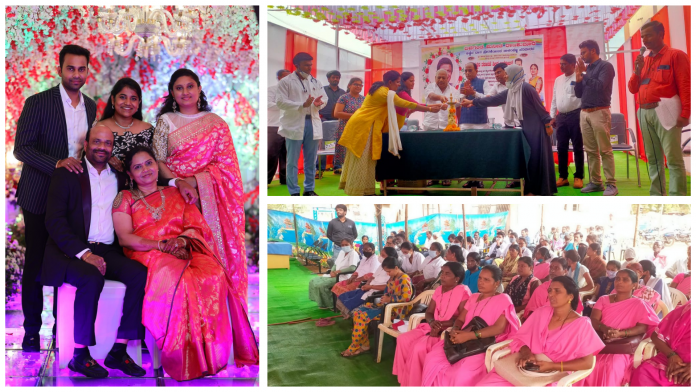 (NewswireOnline): Weddings are occasions of grandeur and celebration, marking a new chapter in the lives of the couple as well as their families. In the midst of all the glam, and festivity, not often do we see couples thinking of anything beyond their personal interests. It is, after all, one of the most monumental days of their lives. However, there are always a few who choose to steer away from the usual norm of celebration, using their special day to help those in need.

Inspired by the late Sandalwood superstar, Punit Rajkumar, whose eye donation helped 4 people with the gift of vision; Dhanraj Talampally, also a businessman, has organized a free two-day eye check-up camp for the people of his hometown in Humnabad to celebrate the wedding of his son Akash. This initiative will help raise awareness on the need to donate your eyes and help save lives.

The wedding of Akash, son of Dhanraj S Talampally and Shailashree Talampally has been fixed with Dr. Shakuntala, daughter of former Karnataka minister and sitting Congress MLA Rajashekar B Patil and Prema Patil. The event will be held on November 21st at Sri Rajarajeshwari Temple, Shakuntala Patil Residential School premises in Bidar.

To mark the auspicious occasion, the two-day eye checkup camp has been arranged at the Community Health Center, in Humunabad Bidar. This was inaugurated by Mallikarjun (Dilipkumar) S Talampally and the groom Akash Dhanraj S Talampally.

Akash Talampally is the Managing Director of Talampally Venture Private Limited and is an emerging name in the Real Estate business. He is the Secretary for the CREDAI Youth wing in Karnataka and is a well-known name in the elite real estate circles of Bangalore.

Talampally Group has been at the forefront of providing support and assistance to the needy people of the Bidar district in Karnataka. Dhanraj Talampally and his team have been widely lauded for the social welfare initiatives that they have spearheaded in Humnabad. This includes educational scholarships, health checkup camps, providing school books, providing food kits, and ration supplies during times of natural calamities and crisis, etc.

Union Minister Shri G. Kishan Reddy addresses the conference of Tourism and Culture Ministers of the Southern Region in Bengaluru