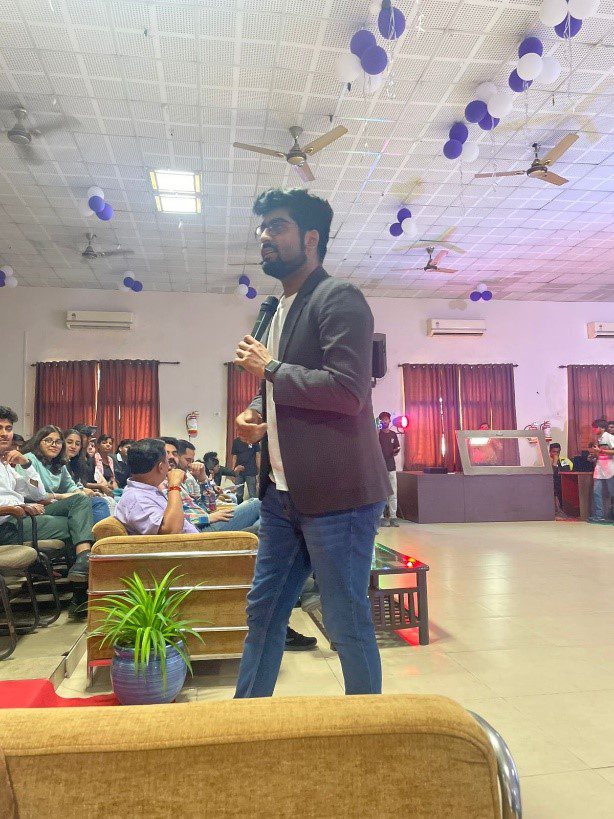 Deepak Pareek spoke about personal branding and the power of starting early. Since he was addressing a bunch of college students, he told them to start early in life so that they have time even if they fail early. He asked the audience, “why do you create content?” to which the audience members responded, “for fame”, “I like doing it”, “for money”, “I’m fed up of my job” etc. The discussion continued as Deepak mentioned that there are various wrong reasons to pursue content creation. In fact, he also mentioned that one should not leave their full-time job to pursue content creation because there’s a high level of uncertainty that comes with it.

Content creation as an industry is a fairly young industry and everybody is still figuring out how to make a mark. The pandemic saw an outburst of new creators come into the limelight as people had relatively free time in their hand. They wanted to explore a lot of new things and as a result, some of them also left their full-time roles to pursue this full-time. For a lot of people, it’s just picking up their phones and recording a video whereas the entire content creation process isn’t a smooth ride at all. It takes 7-8 hours (roughly) to come up with a script, another 6-7 hours for the edit, an hour for the caption, and a couple more hours to interact with the audience. All of this for a 60-second video. Yes!

The event witnessed speakers like Adnan Ahmad, Mohit Dudeja, and Palakh Khanna who also shared their journey on how they started and what were some of the challenges they faced. The keynote session ended on a good note and Deepak Pareek, an Entrepreneur, Content Creator, TEDx Speaker and a Creative Film Producer hailing from Calcutta & now based in Mumbai, India, was felicitated by the core committee members of GLA University, Mathura. Deepak also had an informal chat with the audience members after his speech.