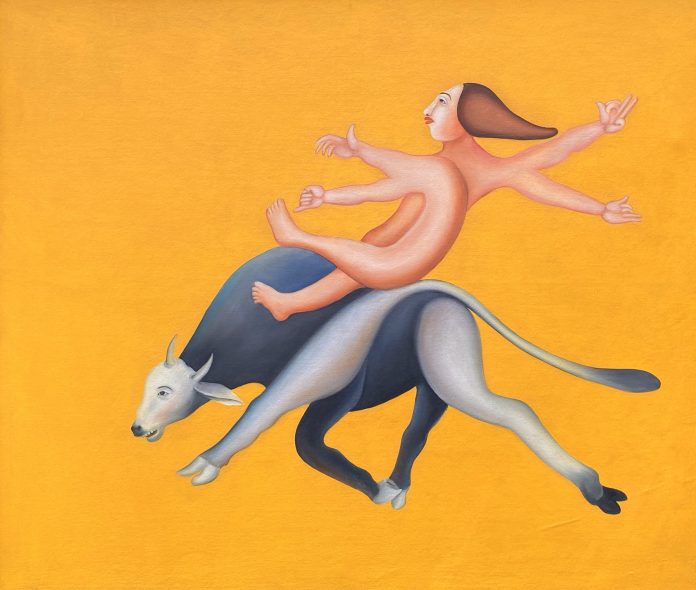 Auction house Bid & Hammer is innovating the technique of silent bidding, also called absentee or sealed bidding, by letting clients fill an online form with their maximum bids instead of the norm of physical ‘bid-sheets’. If you want the discretion of bidding at an undisclosed price, this ‘Silent Bids Auction’ of select paintings of India’s master modern & contemporary artists is the perfect platform as it offers you the luxury of buying at auction and privately at that.

The auction opened on 18th September and closes on 8th October 2020. The ample time duration is for collectors to view, understand and decide if the work is for them or not, before placing the bid which is binding. The auction is for knowledgeable collectors who are tired of the number of auctions happening around and works being constantly offered. This format will help them focus on exclusive paintings by select masters. In this instance the works on the block are from M F Husain, Manjit Bawa and Ganesh Pyne that have been documented, published and with excellent provenance.

Manjit Bawa’s 1993 oil on canvas of a figure riding a bull comes from a close family member of the artist and is also being published in the latest edition of the book ‘A moment in time with legends of Indian art’, coming out after a gap of around 14 years. A commentary on this large sized artwork has been written by a leading artist who was a close friend, admirer and follower of Manjit Bawa’s illustrious career. Estimated between Rs 1.25 – 1.75 crores, Bid & Hammer is targeting serious and also first-time collectors who are looking for a trademark work of the artist at the right price.

Differing from a regular silent bids auction, here the winning bidders would be informed the outcome of their bids privately. When asked about the incremental bidding methodology and the possibility of a tie, Ankush Dadha, Director, Bid & Hammer said “As the bids will be received via an online form, the highest bid received first will be considered the winning bid. In case of two or more bids of the same amount, we will contact the bidders and request them to increase their bid based on our standard incremental patterns”. For prospective buyers it is suggested that one places a bid keeping in mind the estimates and the auctioneers will try to obtain it at the lowest possible price.

A painting by Ganesh Pyne titled ‘The Carter’, executed in 1992, is a haunting figurative in the distinctive style of one of the most notable contemporary artists from Bengal. The estimate of this tempera work is Rs 25 – 35 lakhs. India’s most popular and prolific artist M F Husain’s painting being offered here, from the collection of a journalist, depicts four horses galloping thunderously. ‘Racing against each other, the dust-storm around them is testimony to the raw intensity of the moment’ – this catalogue note aptly describes this colourful painting priced attractively at Rs 70-90 lakhs. Even in their recent No-Reserve Auction of Indian Art which was a sell out, M F Husain’s painting sold at the highest price.

Bid & Hammer had last conducted an invitation only, Silent Bids auction titled ‘The Jodhpur Auction II’ at the Umaid Bhawan Palace in 2013 that was attended by Mukesh & Nita Ambani, Anil Agarwal of Vedanta, Sachin Tendulkar, the Aga Khan, Prince Andrew and Bollywood actor Dia Mirza among others. It also featured a private performance by Grammy Award Winning international rockstar Sting.