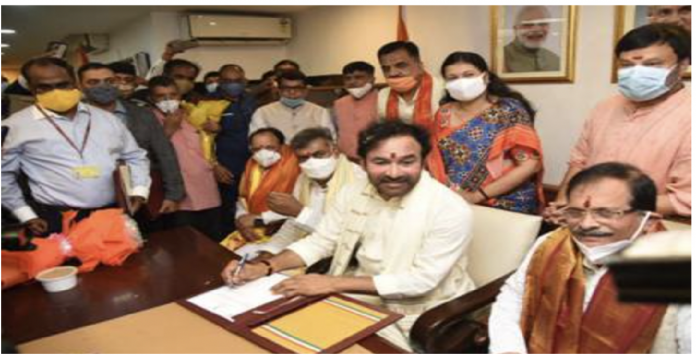 Shri Kishan Reddy has also been assigned the charge of Union Minister of Culture as well as Development of North-Eastern Region. He was earlier holding the charge of Minister of State in the Ministry of Home Affairs.

Speaking to media, Sh. Reddy said that the Ministry will work to fulfill the Prime Minister’s vision of ‘New India’ by investing in strengthening our cultural roots and promoting the Tourism sector.

Shri G Kishan Reddy was elected as a Member of Parliament to 17th Lok Sabha in 2019, from Secunderabad Constituency, Telangana.

Sh Reddy has led several unique initiatives like his work for the child-heart patients which became a movement and won him the Best Child-Friendly Legislator Award in the AP Legislative Assembly by UNICEF (United Nations). He also started a campaign against terrorism and organised International Youth Conference against Terrorism (IYCT) in New Delhi in which over 193 delegates participated from over 54 countries. He also conducted “Seema Suraksha Jagaran Yatra and ‘Telangana Poru Yatra’.

Sh Reddy has also received the Outstanding Youth Leadership Award for the year 2009 by Maryland India Business Round Table (MIBRT), USA and Conferred a medal by Union of Bulgarian Commandos for his contribution towards Global Peace at Sophia, Bulgaria.

Shri G. Kishan Reddy, who people affectionately and respectfully refer to as ‘Kishananna’, is a live example of what one can achieve through sheer determination and hard work. He has travelled extensively across the world representing India and its young leadership in various for a which includes his visits to USA, Israel, China, Nepal, France, U.K., Canada, Morocco, Malaysia, Bulgaria, Singapore, Egypt, Thailand, Hong Kong.

Shri Ajay Bhatt is an advocate by profession and has been a Member of various important committees at National Level. He is from Uttarakhand and elected to 17th Lok Sabha from Nainital Udham Singh Nagar Constituency. He is Widely travelled and has got keen interest in social and cultural activities.