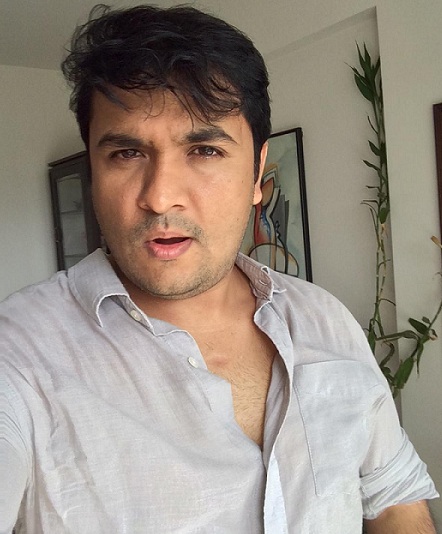 (NewswireOnline):- Shree Rajput Karni Sena asks Mr. Aditya Chopra and Dr. Chandra Prakash Dwivedi to Change the name of the Film Titled ‘PRITHVIRAJ’ to a Title that is more Respectful like ‘SAMRAT PRITHVIRAJ’ or anything, which is Worthy of our National Hero, our National Pride.

Naming the film ‘Prithviraj’ is a total disrespect towards the entire Hindu Society and Rajput Community for whom he is our Cultural Icon, a highly revered Rajput King, and we take a stand against this Injustice.

Shree Rajput Karni Sena has appealed to the makers to change the title to a respectful, befitting title worthy of our national hero. 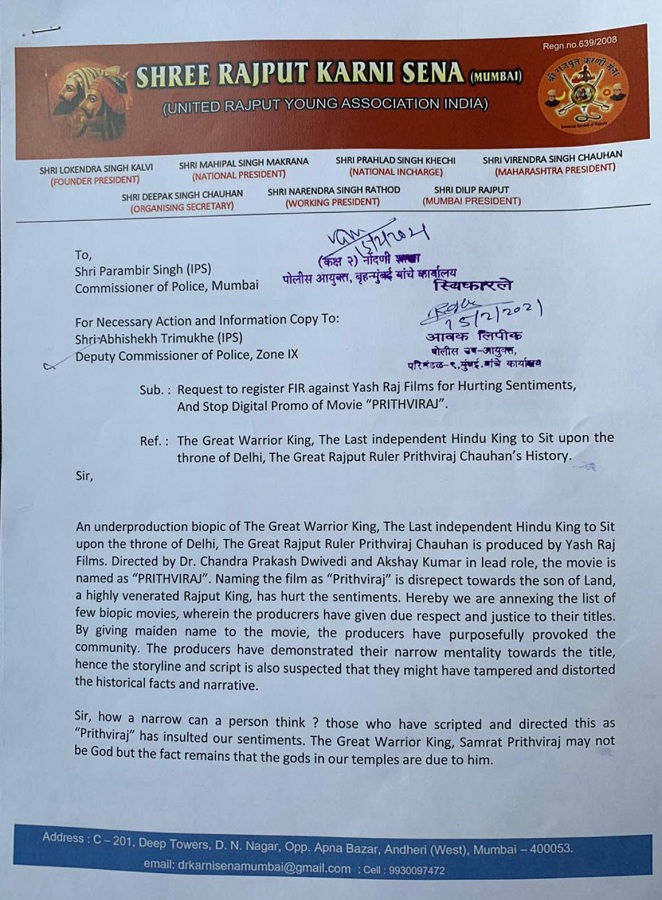 Shri. DilipJi Rajput, Mumbai President, said that the makers have purposely named the film ‘Prithviraj’ to pass the censor board with suspected addition of Spice and Drama to promote Fake Fantasies in an unethical manner that hurt the sentiments of an entire Rajput Community worldwide.

He also added that the producers have Disrespected the Rajput Community by just giving the maiden name of our National Hero to the movie,  with the intention of hurting, demeaning, and provoking our Hindu sentiments, and insulting our Rajputana Heritage.

The storyline and script are also suspected of having been tampered with. The actual historical facts and narratives have been distorted.

Shree Rajput Karni Sena demands an official screening to change the name of the Film and also remove the unethical content and scenes that are only added for entertainment purpose in the Film, which is derogatory for the great Rajputana Heritage and hurts the sentiments of Hindus worldwide. 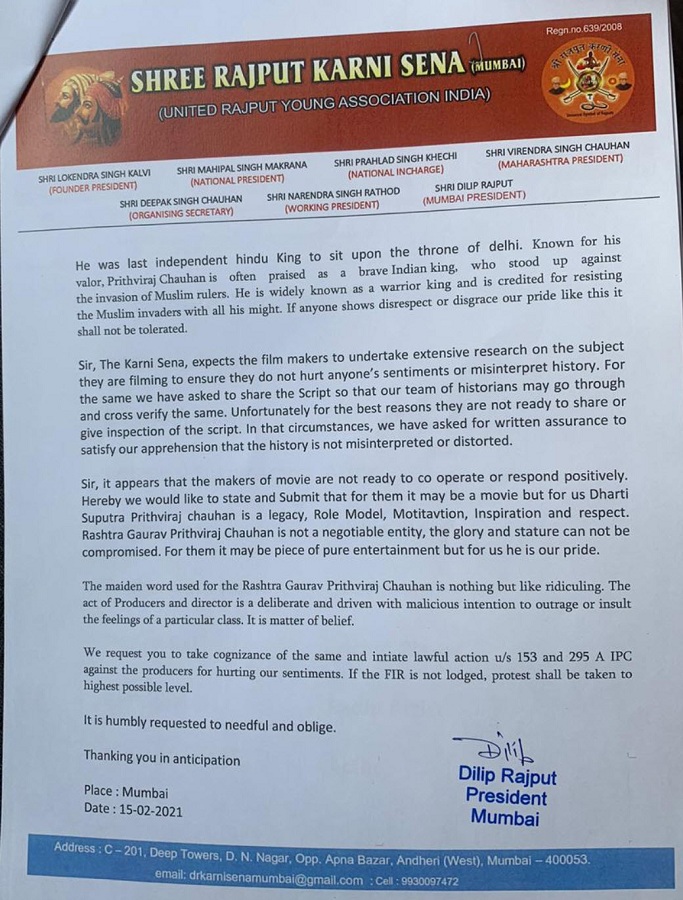 Shree DilipJi Rajput, Mumbai President of Shree Rajput Karni Sena, has lodged an Official Police Complaint about the same (documents attached) and has requested to Stop the release of the Film or Promos or any Pre-release contents or Trailers on any Theatrical or Digital platforms, that disrespect our Hindu National Hero, with distorted stories, scenes, fantasies that will misguide the audience, tamper with actual history and hurt the cultural sentiments of Millions of Hindus.

A peaceful protest will be held if the makers refuse to co-operate for the same.

These contents show unethical, derogatory, distorted fantasies of Hindu Gods and Goddesses, Defaming our Cultural Icons and hurting the religious sentiments of our country.

Shree Rajput Karni Sena takes a stand to protect the Honor of the Real Heroes of our Country, to prevent any Distortion or Tampering of History, and to stop the Defaming of the Cultural and Religious Icons of our country, which truly hurts the cultural and religious sentiments of millions of Hindus and Indians across the Globe.

Kartina Entertainment Welcomes The Cast of Tiger 3 to Russia