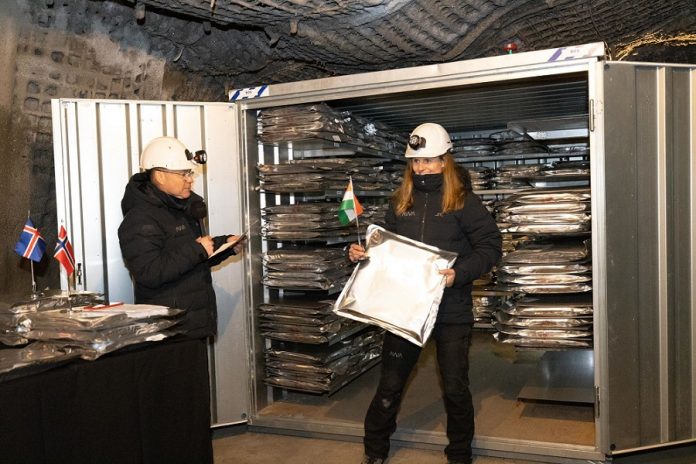 (NewswireOnline):- On September 23rd, 2021, we welcomed 3 new Indian deposits to our Arctic Vault along with many more treasures from all over the world.

Dating back to between 400 and 600 A.D., the Durga Saptashati (also known as the Devi Mahatmya) is one of the earliest texts from the Hindu traditions that describe the feminine aspect of God. These manuscripts have now been digitally preserved and stored in the safest place in the world – the Arctic World Archive (AWA).

The deposit was facilitated by Indira Gandhi National Centre for Arts (IGNCA) and the Ministry of Culture in India, these treasures are a valuable addition to the growing repository of world memory. Piql hosted a ceremony at the archive. Presenting virtually, from India Professor (Dr.) Ramesh C Gaur Dean & Head Kalanidhi Division IGNCA remarked “Depositing Durga Saptashati -Ancient Rare Manuscripts in the Arctic World Archive is a very significant event in the Indian Heritage Preservation as Durga Saptashati is one of the most important Scripture especially with respect to the Hindu traditions,” he said.

Ancient paintings restored from the mysterious Badami Caves and elegant Brihadeesvara temple and, the earliest surviving paintings of the Hindu faith, restored from Badami Caves in Karnataka (India), are being preserved in AWA. Along with these treasures, artificial intelligence-driven catalogues of ancient artworks and white papers signifying India’s cultural legacy in different parts of the world are also being preserved for eternity. Curated by government advisory firm Sapio Analytics, which has breakthrough techniques in image restoration and feature extraction, with artworks photographed and digitally restored by art historian Benoy K Behl, these deposits are a valuable addition to the growing repository of the world memory.

This deposit is done by a newly married couple, Raghav & Shrieya for their wedding photographs as they recognized the significance of the sacred and holy event in their lives and decided to preserve their joy for generations to come. The bride, Shrieya, an accountant in sustainable finance, and her groom Raghav, a roboticist and an engineer, worked with the Piql team to digitally preserve photographs and videos from their wedding and store their precious memories in the Arctic World Archive. The selected files went through different processes with Piql Team to finally be written on a 35mm nanofilm call PiqlFilm that is designed to withstand time and decay.

In the words of Shrieya, “Being able to preserve and ‘freeze’ our wedding pictures forever on this planet feels quite amazing! Also, the glimpse they provide into our culture form part of an important global memory collection.”

“Piql is committed to preserving the Precious World Memory and we are proud to have these treasures from India stored in the AWA. We look forward to a lot more deposits from India in the future”, The CEO of Piql India, Mr. Ravish Mehra commented, virtually participating in the deposit ceremony from Gurgaon.

AWA is a proof data vault with a growing digital repository of world memory located at the remote island of Svalbard in the Arctic Ocean. Founded by Piql AS, the archive uses innovative technology for archiving that has repurposed photosensitive film to be a digital medium. Data is stored using high-density QR codes with all information needed to recover the information also stored on the film, making it self-contained and future-proof. This tried and tested technology can keep data alive for hundreds of years, without the need for migration.

To know more about the deposits, visit the links below:

Ecommerce Website Giftkyade.com has transformed the Riwaz of gifting Amid Pandemic

Founders of Rozana.in talk of their tech-start-up’s peer commerce model