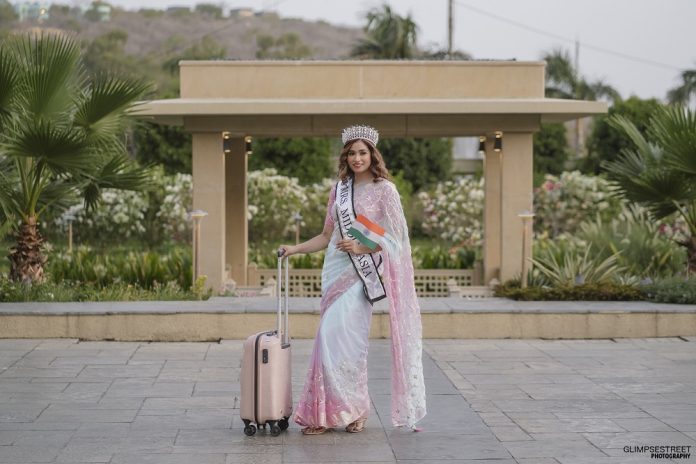 This time Mrs. Universe is being organised for the year 2021 while India has been an integral part of the contest for several years, this year India is facilitating one of its finest contestants with the opportunity to represent the nation in the competition.

However, Mrs. Amrita Tripathi didn’t have much success with her name long before, she built it up with her hard work and determination. “I strongly believe in the be vocal for local concept. It has been my constant endeavour to support and promote local brands as much as possible.”, says Mrs. Amrita Tripathi.

Mrs. Amrita Tripathi has been supported by some of the biggest brands like the Taj Lakefront, Suvega Yamaha, FTV Salon Arera, Brown Bascaed, Piharwa, and Kaarigari who were her hospitality, grooming, nutrition, and styling partner respectively.

“I have been fortunate enough to be working with some of the most respected personalities in their respective felids, including designers such as Ms. Dimple from Delhi. Many of my dresses are designed by designers in Bhopal Kaarigari and Piharwa. It has been a pleasure working with talented designers including Saili Gore Valecha and Prakriti Jain.”, says Mrs. Tripathi.

For tedious five years, Amrita was buried under the responsibilities of being a mother and a wife, it wasn’t till after that realized she wanted to pursue her dreams. With a two-year-old by her side, Amrita managed her studies and secured the rank of a topper in her MBA Program. By profession, she is a physiotherapist, hospital administrator, and entrepreneur but what drove her to participate in such a massive platform is even more heart-warming.

For Amrita to be able to fulfil her aspiration of helping women facing atrocities as a result of domestic violence Mrs. Universe is the biggest platform out there. Her winning Mrs. Universe is not just about winning a title but rather about inspiring women to speak about the atrocities they face.

Domestic violence doesn’t always show itself as physical violence or sexual violence but it also disguises itself as emotional and verbal abuse. Marriage shouldn’t be the end of women’s lives or their identity and if it does result in one, it should not be dragged out for the sake of society or due to family pressure. She believed that if she is able to transform the lives of women around her and the lives of women who see her and look up to her, then she’d have accomplished her dream. Amrita being a diligent spirit has worked hard and lost 13 kgs of her weight gain due to thyroid for the competition.

She wholeheartedly believes and even inspires people to believe that women’s identity or their lives don’t come to an end after marriage and that it is never too late to aspire to anything in life. She also emphasis on the thing that really counts is the effort, once a person embarks on the journey of hard work to achieve their dream, nothing can hamper their growth and the same goes with women.

North East States showcase tourism potential of the region on the second day of International Tourism Mart in Aizawl, Mizoram