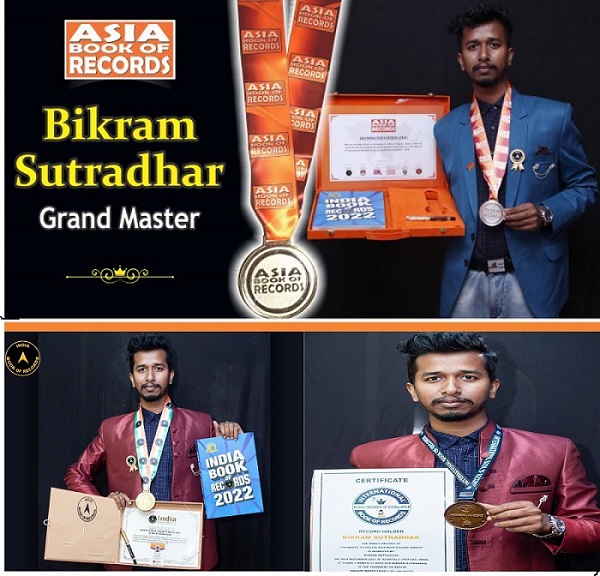 (NewswireOnline):- Tripura’s Bikram Sutradhar has been awarded the title of ‘Grand Master’ for recalling the values of the square root of two up to 325 digits in 57 seconds and 68 milliseconds, as confirmed on January 7, 2022, for the Asia Book of Records.

Bikram recalled the values of the square root of two up to 325 digits in 57 seconds and 68 milliseconds, as confirmed on December 31, 2021, by the India Book of Records.

The World Record of “YOUNGEST TO RECITE MAXIMUM SQUARE ROOTS” was achieved by Bikram SUTRADHAR on December 30th, 2021, from Agartala (Tripura) India. 27 years 1 month 21 days old Bikram Sutradhar became the youngest person to recite square roots from 2 to 384 digits. This is also a new world record for the International Book of Records.

In 2017, he cracked the IIT JAM MS exam with an AIR of 392 ranked. Recently, he worked with a number system. He always thinks about creativity. “Not only studies, I also admire sports, karate, acting, and reading,” says Bikram.

During school life, I faced various kinds of problems. “I don’t belong to a very rich family. My father had to leave this job due to a health issue at the time. At the time, I faced the prospect of having to discontinue my studies due to financial and mental constraints. My school teacher, Nita Das, assisted me in continuing my studies.” says Bikram.

In 2013, he developed a passion for mathematics. Studying mathematics, he came across the studies of Srinivasan Ramanujan and he was highly motivated by Shri Ramanujan’s work.

Bikram is also helping students from poor families in education and assisting them in procuring scholarships or grants.

“I am always willing to help poor families who cannot afford to send their children to school.”, says Bikram.

Bikram’s achievement and inclusion in the International Book of Records is a source of inspiration to young students from Tripura and the entire country, it is a true story of how a boy from humble background chose to rise above the circumstances.

“My mother, Mrs. Uma Sutradhar, and father, Mr. Dhirendra Sutradhar, have always supported me in every way possible and I am able to inspire others thanks to their guidance and support”, says Bikram.

How the STEM is Useful and Important for Basic Indian Education

How the STEM is Useful and Important for Basic Indian Education