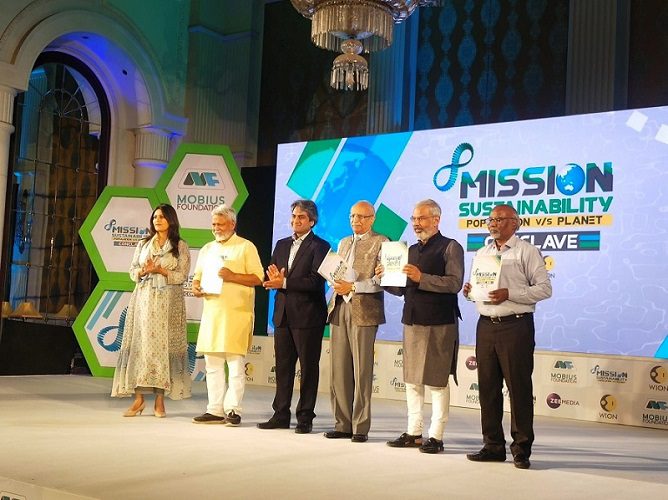 The successful closing of the campaign was marked with an on-ground event “MISSION SUSTAINABILITY CONCLAVE”. The conclave was an amalgamation of stakeholders and dignitaries from across the field of ‘Environmental Sustainability’. The event was divided in to two robust panel sessions “India’s Road Map to Sustainability” and “ Way Forward” along with an exclusive one-on-one fireside chat with the Chairman of Mobius Foundation, Mr. Pradip Burman.

Sudhir Choudhary, CEO and Editor-in-Chief, WION delivered the opening remarks. Rajendra Singh, Water Man of India addressed the conclave with a special message emphasising that ”Indian traditional system has sustainable knowledge. We must make use of it to build a better and sustainable future for our children Firstly ‘Indian indigenous knowledge system’ should be revived and secondly ‘population growth should be controlled’”.

Session 2 “ The Way Forward” brought out focused areas where we as an individual can contribute in population control and also ways Government can take initiatives towards family planning. The panelists in the session were Kartikeya Sarabhai, Director, Center for Environment Education, Shyamala Mani, Senior Advisor, Public Health Foundation of India, and  Shruti Sinha, Manager, Chintan Environmental Research and Action Group.

The session highlighted that we cannot step out of urban lifestyle but what we can do is understand that urbanization or benefits of urbanization don’t have to be in contradiction to being environmentally friendly or climate-conscious. So, very simply put, what we need to change is our consumption patterns, our economy, and our consumption culture, and the way we look at consumption in a whole. Moreover, Climate change is not an elite issue. It’s very much connected to frontline communities, livelihoods, incomes and lives

Kartikeya Sarabhai during the session emphasized and said “India is one of the very few countries, which has recognized the importance of bringing “Environmental Education” at the primary level of the educational system”. He also said “Indian culture has always been rich in tradition, that is climate-friendly. We have always chosen environment-friendly cultural practices and rituals, our attitude towards the environment has been different and we must redeem this and we can still be one of the fastest-growing economies”.

During one on one exclusive fireside chat, Mr. Pradip Burman, Chairman Mobius Foundation, and an environmental crusader had to say that “I totally agree that while the government can do a lot, we as individuals can do small things contributing to big change. Being water-wise, composting and recycling, waste segregation will make a large impact”.

During the event “ Mission Sustainability- Population Vs Planet” a Campaign Report was also launched by the eminent dignitaries present at the occasion. Conclave marked its closure with the closing remarks by Palki Sharma Upadhyay, Executive Editor, WION followed by scrumptious lunch.

About the Mobius Foundation:

The Mobius Foundation is a non-profit organisation, committed to supporting sustainability, empowering technologies, strengthening systems, encouraging healthy behaviour and focusing on education. The Foundation intends to create sustainable, culturally relevant solutions, enabling communities to break longstanding practices that are detrimental to human existence. The Mobius Foundation has been working in India since 2015, collaborating with a diverse range of civil society partners and NGO partners to contribute to achieving a sustainable India.

How Brandstory Digital became a prominent digital marketing agency in Bangalore by Adding Creativity And Innovation.