Home Latest News Microplastics are not just polluting our oceans but also contaminating our soil:... 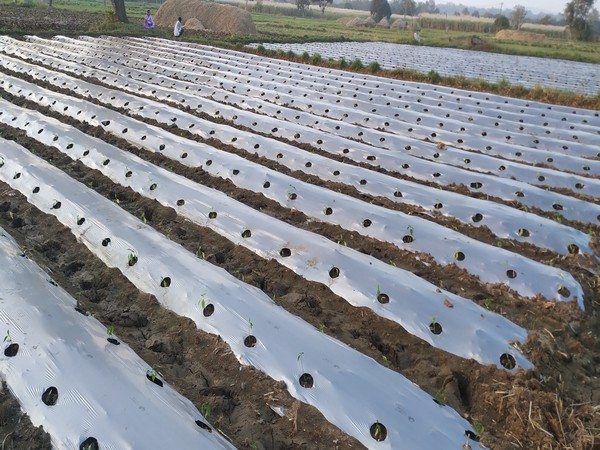 NewswireOnline:- A first of its kind assessment titled “Plastic Mulching: Microplastics in Agricultural Soils,” released by environmental NGO Toxics Link today, has found a high abundance of microplastics in the soil samples that have been using plastic mulch sheets. The usage of plastic film in mulching is a recent development globally, and in India, it has been practised only for a few decades.

Mulching is a practice of covering the soil to retain the soil temperature and moisture to facilitate higher crop production. The study, which tested soil in some agricultural belts in Karnataka and Maharashtra, shockingly, found tiny plastic particles at various depths, indicating soil contamination due to the rampant use of plastic mulch sheets. Recent studies have found that microplastics are not only fatal to the human environment but have also found their way into the human blood and lungs.

The samples have been tested at Manipal Academy of Higher Education (MAHE), India (R&D). MPs were detected in all the soil samples. Dr Amit, Programme Coordinator, Toxics Link, elaborated, “the highest concentration of microplastics was detected in the sample from the dumpsite in Maharashtra with 87.57 pieces MPs per kg, followed by mulched sites at 15 cm in Badgaon in Maharashtra (40.46 MPs per kg) and at 0 cm in Khanapur in Karnataka (37.97 MPs per kg).” A large number of farmers used dumpsites to dispose of their used plastic mulch sheets.

Five distinct polymers were detected in the soil samples. Of which, the major polymers recorded were polyacrylamide (PA; 69.8 per cent) followed by polyethylene (PE; 11.63 per cent). The other polymers found in the samples were polypropylene (PP; 7.7 per cent), cellulose (CL; 3.87 per cent), and polyethylene terephthalate (PET; 3.87 per cent). Plastic mulch films are generally created from low-density and linear low-density polyethylene, which are not biodegradable. As per the farmers’ survey, it was observed that the practice of using plastic sheets in agricultural fields was first practised in Maharashtra, followed by Karnataka.

“Use of plastic in modern agriculture is jeopardizing the overall sustainability of our ecosystem. The plastic used for mulching is relatively thin, and the removal and recycling of these plastic films from the agricultural field are labour intensive, costly, and challenging. Consequently, it remains in the field or is dumped nearby and ultimately disintegrates into micro-particles (microplastics or MPs), accumulating in the soil. The microplastic contamination in the soil can also result in their uptake by plants or crops, affecting the environment and human health,” said Priti Banthia Mahesh, Chief Programme Coordinator, Toxics Link. A recent study has detected microplastics in human blood for the first time, with scientists uncovering the tiny particles in nearly 80 per cent of the people tested. Microplastics or MPs are tiny plastic materials less than 5 mm in diameter and are regarded as a major source of plastic pollution in the environment.

Farmer survey done by Toxics Link in the Belgaum district of Karnataka and Kolhapur district of Maharashtra revealed that many farmers have been using plastic sheets for nearly 20 years, but more farmers are joining this trend.65 per cent of farmers disposed of these non-biodegradable plastic sheets on agricultural land or the roadside. The lack of environmentally sound disposal mechanisms results in improper handling of plastic films after the harvest, resulting in microplastic accumulation in soils.

The findings also unveiled the presence of heavy metals in the soil samples. The examined agricultural soils from Karnataka and Maharashtra were polluted by high concentrations of arsenic, lead, boron, and cadmium. According to this study, the heavy metal load was heightened in the mulched soil samples, implying a potential contribution of plastic mulch sheets.

Owing to the environmental concerns of plastic mulch in the agricultural system, it is imperative to opt for alternatives to plastic film mulch. Several viable alternatives to conventional plastics like organic mulching, including straw or crop residues mulch, paper mulch, photodegradable film mulch, and biodegradable plastics, are readily available for use. “The excessive usage of plastic across multiple sectors is a substantial cause of the environmental crisis due to its non-degradable property. It is necessary to conduct more research in mulched soils across India and take corrective measures,” said Satish Sinha, Associate Director at Toxics Link. He adds, “Initiating awareness campaigns to strengthen the consciousness of farmers about the damaging effects of plastics mulch sheets on the environment is of utmost importance.”

Animals Facts – Get Your Kids Excited About Animals