(NewswireOnline): Human race has witnessed the wrath of Maa Kali’s anger in 2020. Our current vision is of an apocalypse, painted dark and death surrounds us. Dark mother who destroys, slays demons also creates new life forms with her benevolence. It is time to awaken her, ignite her consciousness so as to begin the process of re-creation of life. We need a safe world, without disease and turmoil.

Nivedita Saha is an artist who urges people to turn towards our only hope and invoke Goddess Maa Kali in her form of ‘Devi Maa Chhinnamasta’ (one of the forms of Goddess Maa Kali, one of 10 Mahavidya’s). Maa Kali is omnipresent in all the artworks of this visual story teller. Maa Kali is her inspiration, knowledge and her expression of liberation. Nivedita shares her understanding of ‘MaaChhinnamasta’ and how it’s about time we cultivate our relation with this powerful archetype.

Indian Mythology is loaded with the profound symbolic and metaphoric imagery of gods and goddesses, however more often the true meaning remains least understood, hence gets misinterpreted. Such is the image of ‘MaaChhinnamasta’ which is considered to be the fiercest representation of the Goddess. Partially naked, Maa self-sacrifices by beheading herself and nourishes the world with her own blood to renew the universe. She is standing on top of Rati and Kama who are positioned on a lotus and in the act of creation of life (sexual intercourse). The image represents self-sacrifice, renewal and sustenance on the planet. 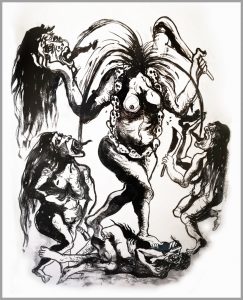 The current state of Global crisis draws the human race closer to the archetype of MaaChhinnamasta. The chaos that surrounds us today is process of self-cleansing which the world is going through currently for new life forms to be born again. MAA lives in all of us as energy. She is not outside of us but is a manifestation of us. Her image conveys spiritual self-realization, an awareness of the cycle of time, life and death, which no being can control. When there is death, new life is being born at the same time thus allowing the world to heal and replenish what is lost.

To view more work of Nivedita, visit and follow –