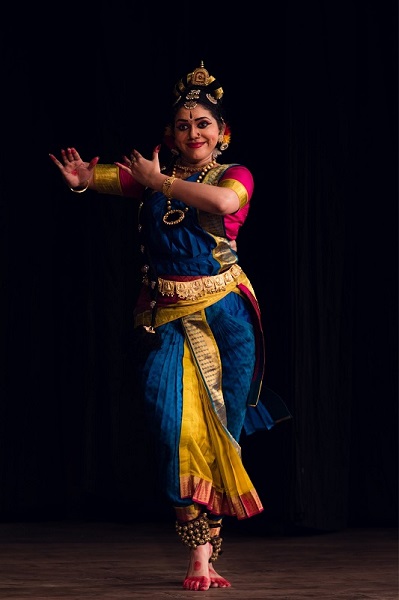 (NewswireOnline):- Kuchipudi exponent Aparna Satheesan has been honoured with the prestigious Bharatha Shastra Nrithya Praveena National Award for her excellence in the field of Kuchipudi, at the 10-day long 64th International festival of dance and music organized by All India Dancer’s Association [AIDA] in Bhilai, Rajpur India on November 10th, 2021. This award has been given in the past to outstanding Indian classical dance performers of India and abroad. She also won first place in Kuchipudi at the International level dance competition by AIDA in 2021.

ALL INDIA DANCER’S ASSOCIATION – AIDA is a non-profit organization in India and its purpose is to showcase “UNITY IN DIVERSITY” through arts and it serves the purpose through cultural activities. AIDA organizes the 10-day dance and music festival every year promoting different classical Indian dance forms and music and also honoring eminent artists in the field.

Aparna is also a winner of the prestigious Cleveland Thyagaraja Aradhana and also Natya Shiromani National Award winner by the India Festival USA for her exceptional achievements in the field of dance and for her charity work through the project “Transforming Life Through Dance”, organizing multiple fundraising events to give back to the society, under Samyoga Foundation which was founded in India in 2015, in memory of her father G.Satheesan and the event was officially inaugurated by Princess of Travancore, Her Highness Aswathi Thirunal Gowri Lakshmi Bayi.

She is a well-established dancer in India and abroad and has received several outstanding achievements in the promotion of multiple classical Indian Dances under the same roof, and also for her excellence in the field. She has performed in leading national and international dance festivals of India and USA. As a performer for over 25 years and as a choreographer, she has produced and choreographed numerous productions exploring several current topics like Kids Against Hunger, Depression. Her dance production Digital Diwali, which depicts how technology plays a role in today’s world during cultural celebrations and festivals, has gained more reviews from eminent dancers in the field.

www.aparnasatheesan.com
Disclaimer: Although we take utmost care to verify the facts, Newswire Online does not take editorial or legal responsibility for the same. The Media Contact and the Organization stated in the release above are the legal owners of the content.