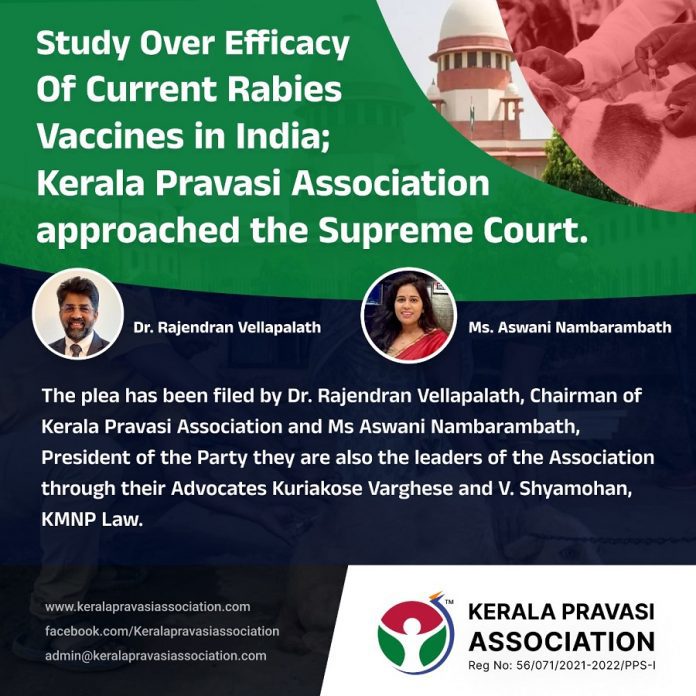 While the Animal Birth Control (Dogs) Rules, 2001 provide an efficient mechanism of sterilization/ vaccination of dogs, there is an urgent need to ensure proper quality control of anti-rabies vaccines that are being administered to both humans and dogs in India.

New Delhi: Kerala Pravasi Association, an Election Commission of India approved independent political party from India led by the “Pravasi” Community has filed a plea before the honourable Supreme Court of India seeking a direction for constituting an independent expert committee to study the efficacy of the Intra Dermal Rabies Vaccines (IDRVs) currently being administered to Humans, on account of the number of deaths that have occurred despite timely administration of the vaccines in the Country.

The plea has been filed by Dr. Rajendran Vellapalath, Chairman of Kerala Pravasi Association and Mrs. Aswani Nambarambath, President of the Party who are also leaders of the Association through Advocates Kuriakose Varghese and V. Shyamohan, KMNP Law.

The petition also seeks the constitution of an independent expert committee to study the effectiveness of the Rabies Veterinary Vaccine administered to dogs in India, given the rise in the number of rabies cases.

Furthermore, a direction has been sought to the Union of India to give wide publicity and to ensure proper and uniform implementation of the National Guidelines for Rabies Prophylaxis, 2019 with appropriate revisions from time to time as per the latest developments and scientific evidences endorsed by the World Health Organisation.

Citing recent incidents where persons bitten by dogs succumbed to rabies, despite post-exposure prophylaxis, the plea raises questions regarding the current treatment protocol. 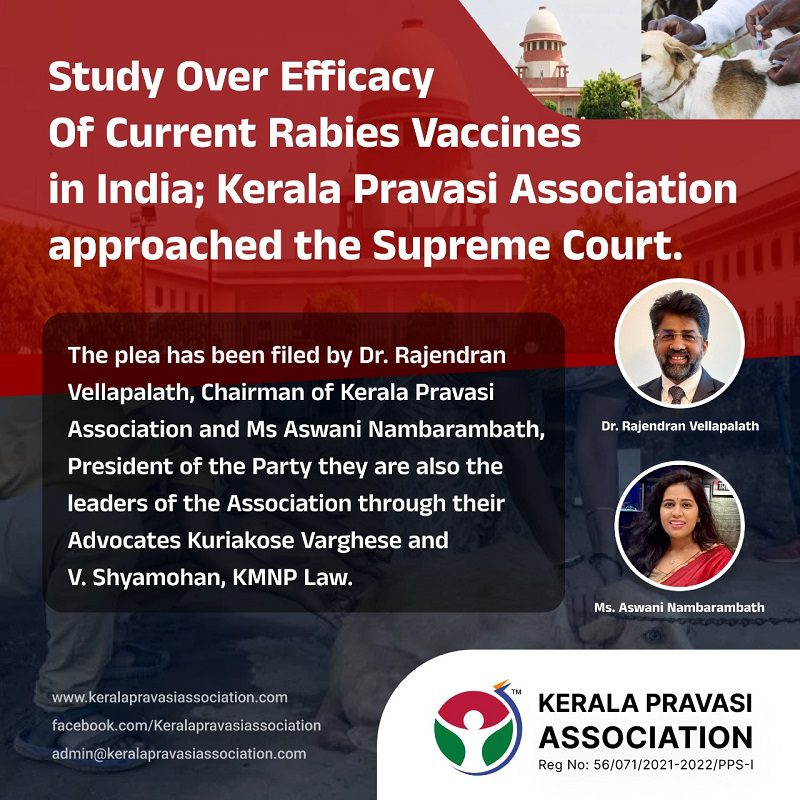 Kerala Pravasi Association has relied on recent newspaper reports which reveal that there are instances where vaccines were being procured even before requisite approvals were obtained from the Central Drugs Laboratory as per the norms.

“As per the guidance note issued by National Centre for Disease Control, manufacturing of Rabies vaccine for humans, being a complex process, needs a minimum of three to four months for manufacturing and testing. Shockingly, there have been instances where the vaccine has reached Kerala State within 14 days of manufacture. Non-adherence to the requisite quality checks would be a direct violation of Articles 14, 19 and 21 of the Constitution of India, apart from violations of provisions under the Drugs and Cosmetics Act, 1940 and Rules thereunder”, the plea reads.

It has been further submitted that the rise in the number of rabies-infected dogs is also a matter of concern; which necessitates an enquiry into the quality of anti-rabies vaccines administered to dogs.

Eliminating the risk of rabies at its source i.e., dogs, is the most effective measure to curtail the spread of rabies, the plea adds.

“The experts suggest that human rabies is a 100% vaccine-preventable disease and the vaccines are considered to be “highly effective, safe and tolerated”. Perforce, without vaccination, rabies is a fatal disease. While improper administration of IDRV is stated to be a possible reason for failure of the medicine in some cases, the recent deaths points towards the very efficacy of the vaccine”, the plea states.

The petition also seeks direction to call for the records pertaining to instances, if any, where vaccines were procured by the State Governments without statutory approvals by the Central Drugs Laboratory.

The Supreme Court Bench led by Chief Justice of India NV Ramana, last month issued notice to the Centre and the Election Commission on a PIL also filed by the Kerala Pravasi Association seeking voting rights for non-resident Indians (NRIs. Kerala Pravasi Association has sought directions to the Central Government to permit Indian citizens residing outside India to exercise their franchise under Section 20A of the Representation of the People Act (RPA), 1950 from their place of residence or employment.

India Hemp expo 2023: Get ready to learn, grow and network about hemp!