Home Art & Entertainment KGF Fame HOMBALE FILMS is thrilled to announce the title of their... 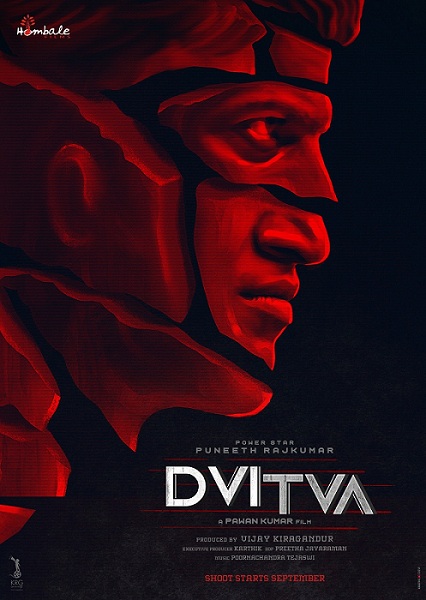 (NewswireOnline):- Indian cinema is typically recognized as showcasing content that revolves around action, masala, and romance because many outstanding pieces of direction, art, cinematography, and acting have gone unnoticed in certain cases.

Over the last decade, Indian cinema has experimented quite a lot and has delivered some unconventional pieces of work. The team of HOMBALE FILMS is experimenting their way through it by tapping on some unexplored parts in the genre of a physiological thriller with their upcoming movie DVITVA and is all set to win the heart of the movie lovers who gravitate around the genre of thriller and promises the audience a delightful watch.

Starring prominent and dynamic actor Punneth Rajkumar and directed by supremely talented ‘lucia and u-turn fame’ Pawan Kumar, it is sure to awe the audience in no time. The title of the film ‘DVITVA’ means duality and is a psychological thriller drama and the team of DVITVA, aims at bringing to the table, the genre of a thriller with an element of uniqueness and freshness, something which Indian cinema has not portrayed more often. The production and principal photography will start from September 2021.

In an exclusive chat, producer Vijay Kiragandur mentioned that he is pleased and delighted to work with Puneeth Rajkumar again in a completely different and exciting genre movie. Further, he also added that he is very sure that director Pawan Kumar’s delivery of this thriller is going to be winsome and the movie is going to be a treat for Puneeth’s fans as they will see him in a very different avatar, than what he has been previously engaged in.

Poster of Dvitva by Hombale Films:

DVITVA is going to be directed by Pawan Kumar, Prertha Jayaraman will be behind the camera and Poorna Chandra Tejaswi will do the music. The rest of the cast and crew will be soon announced by the team of HOMABLE FILMS on the Twitter handle of the team.