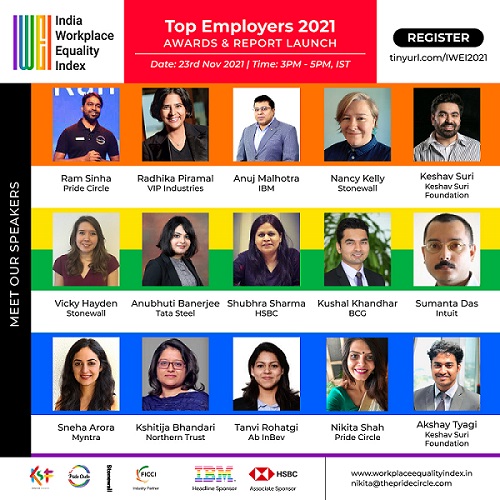 (NewswireOnline):- It is a well-established fact that workforce diversity and inclusive work culture are imperative for business growth. In a globalised, multicultural world, people perform better when they can be themselves and be accepted for who they are — which makes it even more important for employers to create inclusive workspaces. To help employers assess their efforts and navigate the challenges the Indian LGBTQIA+ community faces, the Keshav Suri Foundation and Pride Circle along with Stonewall UK launched India’s First workplace Equality Index (IWEI) in February 2020.

IWEI is an Indian version of the Stonewall UK Workplace Equality Index, a leading benchmarking tool for LGBT+ inclusion in the workplace. Stonewall Workplace Equality Index, in over 16 years of its journey, has seen participation from over 500 organizations from several sectors, ranging from local government and legal to technology and healthcare. And helps organisations build an inclusive and safe space for its LGBT+ workforce.

Despite the pandemic, IWEI continued to strengthen its efforts to bring organisations together as inclusion and affirmative action is even more important in current times. Federation of Indian Chambers of Commerce and Industry (FICCI) came on board as an Industry Partner. A series of round tables and webinars were organised to help companies understand the importance of IWEI and to demonstrate how it can enable them to measure, validate and improve their inclusion practices. Among the gold winners were Microsoft, HSBC Bank, Tata Steel, Standard Chartered, Novartis, Master Card and more.

Stressing on the importance of inclusion and diversity that IWEI is trying to encourage in organisations, Keshav Suri, (Executive Director, The Lalit Suri Hospitality Group and Founder Keshav Suri Foundation) said, “It has been established that inclusion leads to better individual, business and organisational outcomes. Employees actually expect it and want to be part of an organisation that cares. Same for investors and customers. DEI drives effective relations and strategy. Both business case and employee engagement is stronger when DEI is at the heart of an organisation’s endeavours and policy. Therefore, it is imperative for all organisations to actively have DEI policies. Through IWEI we have been able to reach out to 72 organisations this year, share their practices to create an impact.”

Ramkrishna Sinha, Co-Founder, Pride Circle, adds, ‘IWEI is a transformational tool for LGBT+ inclusion in India Inc. Not only does it provide a framework for corporate India to base their initiatives on but also enables friendly competition to collectively raise the bar higher. The LGBT+ community also gets a definitive benchmark to assess an organisation’s LGBT+ friendliness through their IWEI rating.’

IWEI is also the first of its kind in India and the only definitive study of workplace LGBT+ inclusion in the subcontinent. Nancy Kelley, Chief Executive, Stonewall, congratulates the top employers for all the work to foster a culture of inclusion where everyone is encouraged to bring their authentic self to work. She says, “In what has been an incredibly challenging year for so many, it is brilliant to see so many companies returning to participate in IWEI again this year and see new organisations participate for the first time.”

IWEI also serves as an industry-wide recognition, with backing from FICCI, India’s foremost non-government trade association. FICCI Secretary General Dilip Chenoy, says, “FICCI, as an ally, supports the cause of LGBTQ+ inclusion through the overarching Task Force on Diversity and Inclusion (D&I). From the industry’s perspective, preference should be given to talent irrespective of an individual’s sexual orientation, disability, or gender. We urge our members to have inclusive work policies and practices in their respective organisations. Profitability tends to go up if you have diverse leaders. Let us undertake collaborative efforts to make organisations a better place to be. FICCI is glad to be associated with the India Workplace Equality Index for LGBTQ+ inclusion as an Industry Partner. I congratulate our co-partners, KSF, Pride Circle, and Stonewall UK for their continued efforts towards advancing the participation of the LGBTQ+ community in mainstream society.”