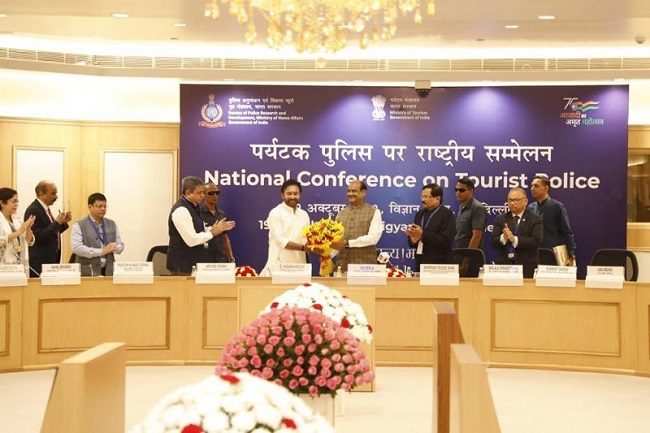 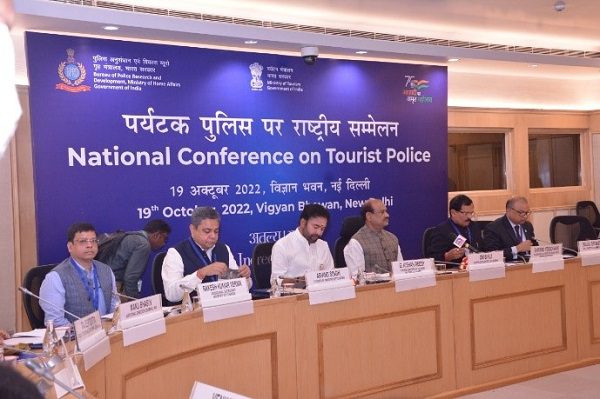 Referring to increasing digitization in the tourism sector, Shri Birla said that in the information era, tourists ordinarily get every information related to their travel through mobile. In this regard, Shri Birla emphasized on developing a mobile application which provides all relevant information related to the tourists to their destinations in multiple languages. He said that to ensure safe and comfortable travel, this app should provide updated and complete information about hotels, taxis, guides, etc., among other facilities, and facilitate police assistance whenever needed. Shri Birla stressed on the need for quick police action in cases of crimes against tourists, saying that such steps increase the confidence of tourists and create a good environment. Shri Birla welcomed the establishment of tourism police by several State Governments from the point of view of tourism security and advised all the States and the Central Government to share best practices among themselves.

Regarding giving better security to the tourists, Shri Birla said that it is necessary to give adequate training to the tourist police for effective security and these police personnel should have knowledge of many languages and use of new technology. Referring to the hosting of the upcoming G20 summit by India, Shri Birla said that the Heads of State, leaders, and officials of the G20 countries will visit major tourist destinations of the country. This event will give us an opportunity to improve security and policing in popular tourist areas. Shri Birla opined that the country where the law and order are better, tourist inflow improves. Therefore, it is necessary to train the police in this regard. Emphasizing on the need for learning languages by tourist police, Shri Birla said that language is a medium to connect us with culture and country and therefore all tourist places should have multilingual tourist helpline facilities, which can provide information to tourists in their language. Simultaneously, tourist guides, especially female guides, should be multilingual.

During his address, Shri G Kishan Reddy said that India always has something for every kind of traveler, ranging from lofty mountains to fast flowing rivers, rolling valleys and sand-dunes. India offers a myriad of fascinating places of interest, natural beauty, and vibrant culture, which are globally unparalleled.  As we celebrate the Azaadi Ka Amrit Mahotsav, in the past 75 years India has become synonymous with tourism, spirituality, transformation, culture, and diversity. It is a matter of great pride to celebrate record beating expansion, leading India to become the 5th largest economy in the world.

Union Minister added that the government has opted a 360-degree approach to encourage the Tourism sector. Union Minister said that our focus is on safe, responsible, and sustainable tourism which are the thrust areas of the upcoming National Tourism Policy2022. The Union Minister further said that unscrupulous elements are active mostly at hotels, at entry-exit points of airports, railway stations and bus terminals. He strongly condemned the incidents of theft fraud incidents at some of the tourist places and asked the police administration to deal with them forcefully. We should have a policy of zero tolerance for incidents threating safety and security of tourists, he said. Shri Reddy added that such incidents tarnish the image of our country. So, to ward off all these issues, there is an urgent need to put in place proper systems. He added that police should be trained to secure active participation of Civil Societies, and NGOs in tourists places.

Shri Reddy said that now as the presidency of G20 shall also be with India from December 2022 for a period of One-year, it may be taken as a great opportunity for promotion of India Tourism products. We can showcase India to them and give them best experiences so that they may work as Ambassadors for the Indian Tourism products in their respective countries.

Shri Shripad Yesso Naik highlighted that Tourism sector contributes around 5.02% of India’s GDP and has supported around 14.87% of total direct & in-direct employment during the Financial Year 2018-19 and contributed Foreign Exchange Earnings of Rs. 2.12 lakh crore (USD 30 billion) in Indian Economy during the year 2019. Tourism in India has contributed significantly to making India the 5th largest economy in the world, though we are yet to optimize its full potential. Shri Naik added that safety and security is the first and foremost concern for any tourist, whether International or Domestic. Security related issues around the globe impact and affect tourism industry on local as well as global level. For any global tourist, India is not just to place to see or visit, but a destination to experience and get connected with people, culture, cuisine, and many more. For enriching the experience of the tourists visiting India, we need to be more focused about the safety & Security related aspects in & around the tourist destinations and across India, in general.

Secretary Tourism Shri Arvind Singh in his concluding remarks said that India’s global tourism indices will go up by improving the safety and security aspects of tourism and would go a long way in making India one of the favorable destinations. He added that this conference is another step to take measures to improve the confidence of travelers and implementation of this kind of uniform Tourist Police Scheme in the states and UTs, will result in safer tourism.

The objective of the National Conference on Tourist Police Scheme was to bring Ministry of Tourism, Ministry of Home Affairs, Bureau of Police Research & Development, and State Govts/ UT Administration on the same platform, so that they may work together in close coordination with the State/UT Police department and sensitize them about the specific requirements of the foreign & domestic tourists for effective implementation of Uniform Tourist Police Scheme at pan-India level. This will change the safety & security-related perception of India at global level and will help in making India a must-visit destination around the globe.