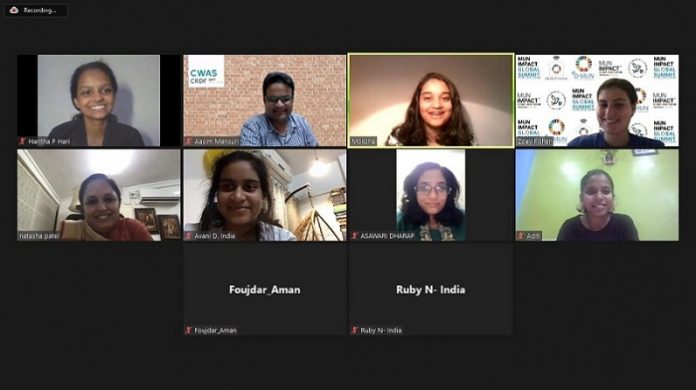 (NewswireOnline) New Delhi – Youth activists with ages ranging from 12-18 and drawn from 4 major cities in India — New Delhi, Bangalore, Mumbai, and Lucknow — engaged in a national consultation on August 20-21 2021 which focused on ensuring clean water, basic sanitation and hygiene, and essential pandemic protection (WASHPAP) for everyone in India and around the world by 2030 in the context of the global fight against COVID-19 and future pandemics. Participants shared their own experiences and those of their community, responded to questions posed by WASHPAP specialists, and provided inputs on a resolution to be presented publicly to the United Nations General Assembly in September.

The ground-breaking effort was organized through a collaboration between the India Sanitation Coalition, the global interdependence movement OneShared.World, and MUN Impact, a leading virtual Model United Nations network.

An earlier version of the resolution was developed through a series of Model United Nations youth debates held across the globe earlier this year in English, Spanish, French, and Russian. The resolution will be released at the OneShared.World global summit on September 23, 2021, and is expected to garner significant state and civil society support.

Unlike nearly all past Model United Nations and youth consultation efforts, this initiative is designed to establish, implement, and promote an actual plan for solving the problem it has identified. The final resolution will be shared with all governments represented at the United Nations and actively promoted through a high-profile and youth-led global advocacy campaign.

Recognizing the urgency of the COVID-19 global health crisis, the initiative is a step towards compelling world leaders to make a pledge later this year to enact an inclusive and comprehensive planning process for WASHPAP over the following year.

“Particularly over the past five years, India has made rapid progress providing basic sanitation facilities to all. These efforts must now be part and parcel of our nation’s pandemic response. It is heartening to note that a large part of this change is being driven by the involvement of young adults who are keen to lead India and the world toward making WASHPAP for all a global reality,” said Naina Lal Kidwai, Chair of the India Sanitation Coalition.

“The pandemic has shown us that we are only as safe as the most vulnerable among us,” said Jamie Metzl, Founder and Chair of OneShared.World, “That’s why ensuring WASHPAP for all is not charity but the smartest and best investment we can make in a better future for everyone. Because older generations have failed to build this better world, young leaders like the incredible people guiding this process must lead the way.”

“Young people are rarely given an equal seat at the table with experts and global leaders, but the #WASHPAP2030 India Consultations are breaking through these barriers and providing young people with a platform to drive real and meaningful change. Our world will be a safer place if everyone recognizes the role of youth leadership in helping solve our biggest global problems” said Zoey Fisher, Global Secretary General of MUN Impact, following the success of our WASHPAP India consultations.

Last year, the Indian government played a key role ensuring that language provided by OneShared.World was included in the final communique of the G20 Riyadh leaders’ summit. Suresh Prabhu, the Indian government’s Sherpa to the G20 and G7, at that time affirmed the leadership of Indian Prime Minister Narendra Modi as a champion of the water and sanitation agenda and, for the first time, committed his nation’s support to the global WASHPAP agenda. “I hope the goal [of WASHPAP for all] will not remain a goal,” Prabhu stated. India’s global leadership and role as the G20 host in 2023 will be essential to ensuring the implementation of this crucial commitment.

“WASH is a stakeholder-centric sector. Therefore, the introduction of a universal responsibility like Individual Social Responsibility to ensure such contribution could be a way forward to ensure WASHPAP is implemented to help in achieving the SDG 6 goals” opines Sandhya Haribal, the Bangalore City Specialist.

“The Indian government has an important opportunity to lead global efforts ensuring WASHPAP for all by 2030, particularly in the run up to India’s hosting of the G20 in 2023, the same year that the UN Conference on the Water Action Decade will be held,” said Metzl. “The incredible young people from around the world who are leading this call to action are indispensable allies in this process.”

OneShared.World is a broad and inclusive movement of people in 125 countries on five continents working collaboratively across diverse cultures, communities, ethnicities, generations, and nations to ensure a better future for humankind and the sustainability of our common home. The organization is building a fully inclusive, global social movement and political force representing the democratic expression of our common humanity. The organization’s Declaration of Interdependence has been translated into 20 languages.

MUN Impact is a non-governmental organization in collaboration with the UN Department of Global Communications that believes in the power of youth and Model United Nations to inspire action and impact for the UN Sustainable Development Goals. Model United Nations has affected millions of delegates in personal, social and academic ways. But there’s always been a missing link-translating your knowledge and skills into actual impact in the world. MUN Impact seeks to fill this gap by giving students the tools, ideas, networks and inspiration to take action in their communities. Over the past year, MUN Impact has engaged 25,000+ students from 150+ countries in a variety of virtual and in-person programming including three global summits, SDG-based Model United Nations courses, mentorship, and debates, Global Weeks of Action, and SDGHubs.

The India Sanitation Coalition is a multi-stakeholder platform that brings the private sector, government, financial institutions, civil society groups, media, donors, bi-lateral/multilateral institutions, experts, etc. together on a common platform to work in the development space and drive the sanitation agenda of the country through a partnership model. Through a range of catalytic actions, the organization supports the unlocking of WASH financing with focus on the private sector, forging partnerships with allied organizations for leading the discourse on sustainable sanitation; convening, curating and disseminating best practices in the sanitation advocacy space and providing inputs into the policy aspects of sanitation through participation at the allied forums.