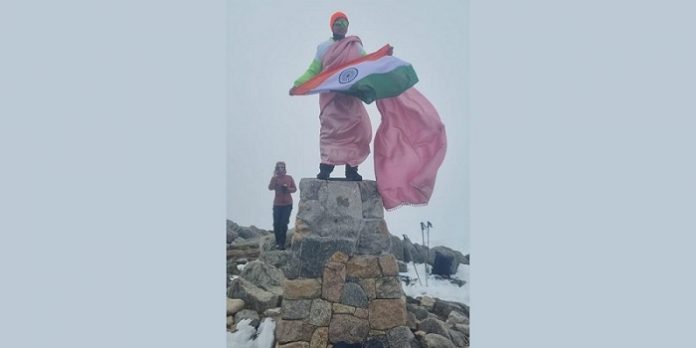 When you have to describe Gayatri Mohanty to somebody, you find it difficult to find the right adjectives to do so. Gayatri grew up in a small town that was driven by patriarchal thoughts and approaches. Her father, however, always encouraged her to follow her dreams and supported her in every decision she took in her life. Armed with an MBA degree from a reputed management institute, Gayatri embarked upon a career as a banker.

After spending 12 years in the banking sector and rising through the ranks, Gayatri decided to take a break from her professional career to look after her family which included a little child to whom she was a mother. While she missed being a part of a professional setup, this phase helped her get clarity on what her true calling in life was. A visit to the mountaineering club in Bengaluru, where she is based, gave her a new perspective and gave birth to the mountaineer in her.

“I strongly believe that no dream is impossible to achieve if you are determined enough. I grew up in a society where most women were forbidden from dreaming and having certain aspirations in life. For most girls and women around me, even having a professional career was a distant dream. Young women were told to get married, have children and look after the household. I feel blessed to have a strong support system in the form of my parents, husband, and children. They always gave me the support and encouragement to do whatever I wished to do in life”, says Gayatri.

After quitting her job in the year 2007, Gayatri had planned to go for a hike. That’s when the Triund hike in Himachal Pradesh happened. It was a one-night hike and it changed Gayatri’s life forever. She is somebody who has always believed in a sense of community and building strong bonds with people which is very difficult to do in a tier-1 or a cosmopolitan city. Her first trek made her realize that there was a great scope for her to meet new people and build solid friendships in this space. She found the process so amazing that she decided to keep hiking.

“I did my basic mountaineering course at the age of 40 which is very rare. I did that a couple of months back after going on multiple treks as I wanted to study it further. I underwent a gruelling training session for 28 days from the Nehru Institute of Mountaineering. It made me much stronger. The most difficult trek for me was the Chadar trek in Ladakh where we had to trek in -40 degrees. I finished the Glacier trek with a broken twist. For seven days, I was in pain but I managed to complete the trek without any plaster or medical support. That was a turning point in my life as a mountaineer. As an NCC Cadet, I represented Odisha in the year 2002. I was in college then. Despite having injured my leg, I went ahead and participated in the Rajpath march on 26 January 2022. I have always found my strength in pain. Incidents like these have shaped up my life. For the Youth Exchange Program organized in 2003, I was selected by the NCC to represent India in Nepal.

Mountaineering has given Gayatri a purpose in life. With time, she believes she has become much stronger and is prepared to learn and do many more things in life. She asserts that mental strength is as important to become a mountaineer as physical strength is. She also believes that the process of learning never stops no matter how skilled or experienced you become.

“Last year, when I did an Everest Base Camp trek, I climbed two other peaks, Nagar Shankh, and Kala Patthar. These were very close to the Everest Base Camp. Everest Base Camp itself is a very difficult trek. I received a lot of encouragement from Lt. Colonel Romil Barthwal, who happens to be one of the founders of the expedition company Boots & Crampons. He told me that I should start climbing higher peaks. I came back from Everest Base camp and decided to do 7 summits across 7 different parts of the world. I recently climbed Mount Kosciuszko, Australia’s highest peak which is 2228 meters above sea level. My goal is to complete 7 summits.”

Apart from fulfilling her own dreams, Gayatri is now helping people realize their dreams and chase their passion in an organized manner. She has launched her own company where she and her partner encourage people to follow their dreams. Being a mountaineer has helped her have a clear mindset and a better outlook towards life. Through her endeavours, she wants people to understand the importance of following one’s dreams and never feel unsure walking down the roads that have not been explored earlier.

In the last couple of years, Gayatri seems to have got many of her dreams off her checklist. As a mountaineer, she has completed several difficult treks including ascending Africa’s highest peak Mount Kilimanjaro situated at 5895 meters above sea level. She has also climbed Mount Elbrus which is Europe’s highest peak at 5642 meters above sea level. There have been several incidents that shed light on the kind of passion she has for mountaineering. During one of her treks, Gayatri broke her wrist and suffered from a great amount of pain. Despite this, she completed the trek while taking all the necessary precautions.

Elaborating on this, she says, “When you participate in mountaineering, you should be ready to face some challenges that come your way. Throughout my life, I have believed in one important principle. Regardless of which situation you are in, you must give your best and never think about giving up. When I was a banker, I worked diligently and performed my duties to the best of my abilities. I have followed the same principle in my mountaineering career. This mindset has been one of the reasons behind doors opening up for me in different sectors and professions.”

Gayatri wears multiple hats and wears them all very well. Apart from being a renowned mountaineer, Gayatri is a professional fitness consultant and a certified Zumba trainer. She has been crowned at multiple beauty pageants including Mrs. India Global Universe and Mrs. Dazzling Diva. She was the runner-up at the Mrs. Karnataka pageant. She has excelled in everything she has done so far and that speaks volumes about the kind of dedication she has put into everything she has explored in her life. One of the reasons behind her doing so many things efficiently, she believes, is her healthy lifestyle.

“You will be able to achieve something in life only when you have a healthy body and a well-functioning mind. My love for fitness has helped me remain positive and in control of my mind through all the ups and down I have gone through in life. It also gave me the strength to achieve more than I had wished for. It also led me towards becoming a fitness consultant and imparting my knowledge of health and well-being to several individuals”, she says.

Gayatri has won numerous awards and received accolades from institutions of global repute for her mountaineering endeavours. When she is not busy climbing the mountains, she makes people aware of the importance of fitness in one’s life and how one should go about achieving a healthy lifestyle. While the world sees her as an over-achiever, Gayatri feels her journey has just begun.