Home Business From a struggling nobody to a Renowned Authority of Focus, Gaurav’s achievements... 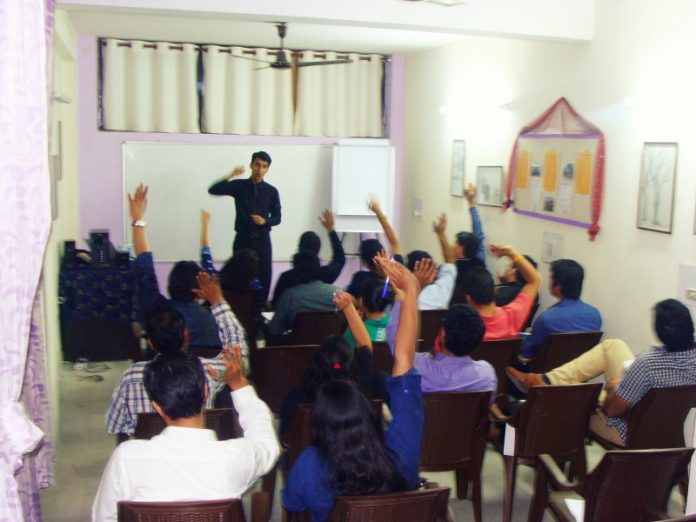 (NewswireOnline): Gaurav Arora, India’s only Focus Mastery coach, is an entrepreneur with an annual turnover of 1 Cr+. He has coached Business owners from 30 Lakhs to 150 Cr+ turnover to speed up their Business growth plans and increase their profitability exponentially with his curated science of Focus.

His life is wonderful now, but it wasn’t this way when he started. From a nobody who has even worked in a call centre, to an in-demand, highly paid coach that he could have only dreamed of, otherwise. 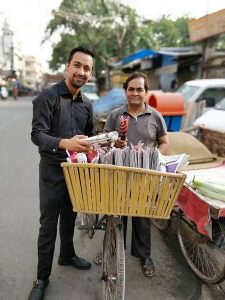 Born in a lower middle class family, the elder son to a loving father who is a newspaper vendor and mother a housewife. Gaurav’s father invested all his hard-earned money in his education as only through education, he could have changed the fate of his family.

God was graceful, he turned out to be a dedicated student and started pursuing CA. The feeling of fulfillment started to develop in his parent’s souls looking at his promising career. After all, every parent wishes the same for their kids.

But something in his heart told him that this wasn’t it. After devoting 5 years in CA, when the hopes of his family were at peak and their sufferings about to end, Gaurav Arora dropped out of CA 11 months before the final exams.

For a grey-haired father, with no savings left, this broke like a thunderstorm.

And why did he do that?

“Because CA was not driving me. I wasn’t passionate about it. The whole education system felt like a scam.”, he said.

Gaurav, in his heart, promised himself that he’d work as per his terms and society cannot press him down with its baggage. He would follow his heart. For a young chap of 22 years, this was really bold and strong.

He read a lot of books, understood the mindset of what makes rich people richer, poor more poorer. With all the R & D he was doing, he became interested in coaching and consultancy .

When somebody asked Gaurav why his interest developed in coaching, he said “It was so relatable and upfront- You can rise if you can help others to rise.”

And with utmost enthusiasm and learning, he organised his first workshop. Gaurav’s energy was so high, that he felt that he can change the world, and his knowledge can actually impact everyone.

Expectedly, it turned out to be a disaster. In the booking of 150 + people, only 4 people turned out. And this is not it, he blacked out completely and had put himself and his father in a debt of 1.5 Lakhs.

This moment would have shook anybody to go back to what everybody said was right, but not Gaurav. In his interview, he said, “That moment, I was shattered. I felt worthless and nothing seemed right. Everyone I knew forced me to continue with CA saying I will destroy my career and future. But keeping an option in my life was never a choice. Easier said than done, I was very clear from day one that I want to do what I love to do. It got more difficult when I could earn only Rs 18000 in the first year of my career, working in a call centre to meet my needs and collect some savings for my Business capital.”

And then, his actual journey began. He was tolerant, distracted and with no schedule. Gaurav understood that this is the problem with maximum business owners- FOCUS.

He toiled day and night, did a lot of experiments and surveys and came with the initial modules of his unique subject :FOCUS MASTERY. 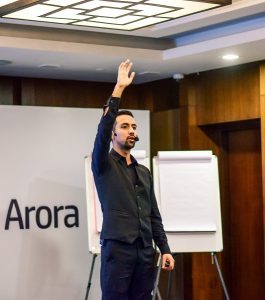 He started with an INR 500 personal coaching class for his clients. Though the amount was small, it was a stepping stone to the big journey that Gaurav was about to embark on.

Amidst the depressive turns his life was taking, a ray of inspiration came in through a friend named Parmeet Singh Sood. In a conversation, Sood said “Man Jeete, Jag Jeet” (If you can win your heart, you can win the world). This kind of changed Gaurav Arora deep down and gave fire to his vision.

From then on, he became rigorously involved with his subject and course. From no stage skills, no selling skills, no marketing skills and no content delivery skills, slowly and steadily he became the master of all.

The obsessiveness to find the truth with what makes a few businesses get bigger, faster led to a discovery of his course that was now unstoppable. His clients were able to now increase their business by 2X-10X, and he became one of the fastest growing trainers of Delhi.

The same guy who charged Rs 500 per class is now charging in 6 figures in Group Coaching, honoured to coach some of the most renowned business owners of Delhi and different parts of the country. More than 4500+ Business owners have attended his workshops and online courses, and it has changed the way business owners are doing their business.

His mantra is simple- “If you can change your Habits, you can achieve any result in your Business”