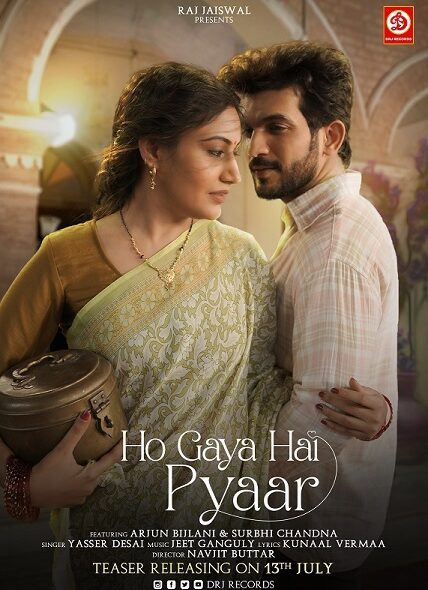 NewswireOnline:- In today’s times, one comes across several singles being released by different music labels. However, there are some songs that boast of an everlasting melody, rich poetry, and soulful singing. These are songs that not just become a part of your playlist but also of your life. One such song releasing this week is the Yasser Desai sung ‘Ho Gaya Hai Pyaar’. The song has been composed by Jeet Gannguli and written by Kunaal Vermaa.

While the teaser of the song is all set to release on July 13, its strikingly beautiful poster, featuring the two leads Arjun Bijlani and Surbhi Chanda, has just been released. The poster is steeped in romance and gives you a good idea of what you can expect from the song. Those who have seen the music video directed by Navjit Buttar vouch for the fact that it is as gorgeous as the audio track.

Talking about the process of shooting the music video, director Navjit Buttar says, “We worked very hard to create some interesting visuals for the song. When I heard ‘Ho Gaya Hai Pyaar’, I instantly fell in love with it. I wanted to shoot a video that would complement the melody and the lyrics of the song. The beauty of the song and the video is its simplicity which will strike a chord with the audience instantly.”

Navjit, who started his career in the Punjabi music industry, is now a name to reckon with nationally. Donati Media, a film and visual production house set up by Navjit and Team; Donati has produced numerous videos under the supervision of Navjit Buttar. He has directed some of the most popular music videos made in the recent past like T-Series ‘Dil Lauta Do’ featuring Sunny Kaushal and Saiyami Kher and Jubin Nautiyal’s ‘Khushi Jab Bhi Teri’ featuring Jubin Nautiyal and Khushali Kumar. He is known for having an eye for visual aesthetics and has collaborated with some of the most prominent names in the film and music industry like Darshan Raval, Diljit Dosanjh, Neha Kakkar, Vishal Mishra, Tulsi Kumar, Papon, Jassie Gill, and Ammy Virk among other.

“Since people watch music videos from all across the world today, with each video one has to offer them the kind of visuals they have never seen before. Apart from ensuring the visuals are good, I also make sure that the video has a story that will connect with the audience. I believe every song tells a story and I try to capture it in the form of visuals. Working on ‘Ho Gaya Hai Pyaar’ was a wonderful experience as all the artists put their best foot forward”, he says.

Directed by Navjit Buttar and featuring Arjun Bijlani and Surbhi Chandna, the teaser of ‘Ho Gaya Hai Pyaar’ is all set to release on DRJ Records’ official YouTube channel on July 13. Prior to this song, Navjit had collaborated with DRJ Records on three other original singles which went on to become smash hits.