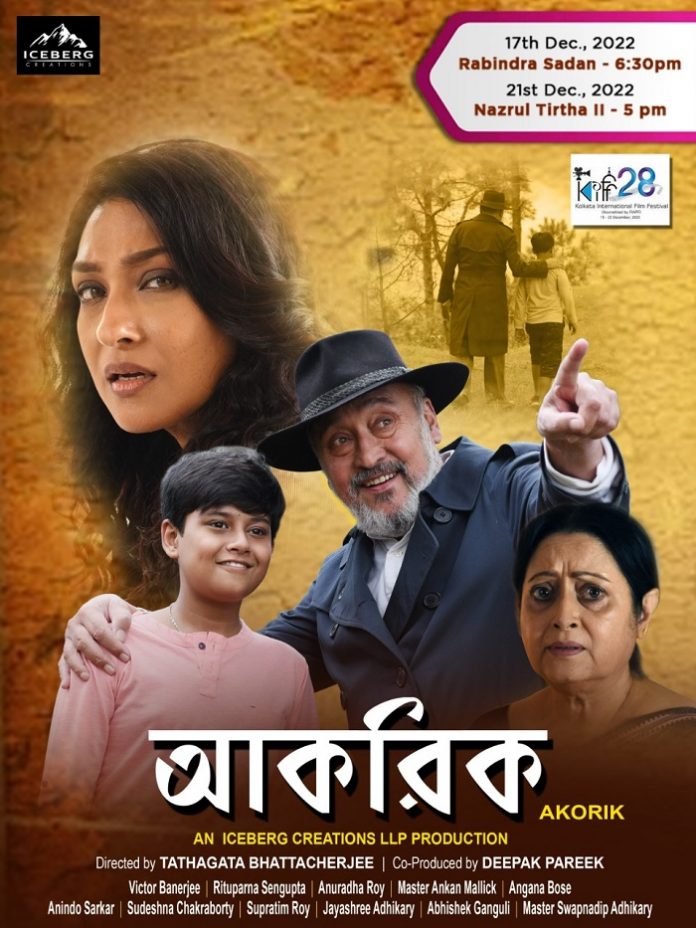 (NewswireOnline):- Bengali Feature Film AKORIK is on its way to the Big Screen as the Film has been officially selected for screening in the ‘Bengali Panorama’ at the 28th Kolkata International Film Festival – KIFF 2022. The Victor Banerjee – Rituparna Sengupta starrer will be screened at Rabindra Sadan on 17th December 2022 at 6.30 pm and at Nazrul Tirtha II on 21st December 2022 at 5 pm.

Produced by Iceberg Creation LLP, Co-Produced by Content Creator Deepak Pareek and Directed by Tathagata Bhattacherjee, AKORIK is a story about a relationship between an old man, who grew up under the umbrella of traditional Bengali Joint Family System, and a boy, who lives with his mother – a single parent. The man and the boy, from two different generations, develop an emotional bonding despite their different upbringing values and eventually share a philosophical journey together. The film addresses a cultural crisis for the community i.e. disintegration of the Bengali Joint Family System and tries to look into the situation neutrally searching an answer to a significant question- where are we heading?

“AKORIK is a family film which talks about a global issue of disintegration of the Joint Family System into Nuclear Families & further into Single Parenting. It leaves a question about whether we have progressed socially in the process or have drifted away from our roots” says Director Tathagata Bhattacherjee.

“We are really vey excited to know that our film AKORIK has been selected for screening in the Bengali Panorama at the KIFF 2022” says Deepak Pareek, the Creative Producer of the film and a well-known content creator and entrepreneur. He further said that “A rapid growth in the individualistic outlook can be witnessed among the people and where joint family can be seen as traditional, perfect, and loving, from the same point of view, it can also be seen as restricting, conservative and rigid. AKORIK tries to grasp these concepts while portraying the bond between the 75-year-old man and a 10-year-old kid.”

AKORIK had also participated in the recently concluded NFDC Film Bazaar in Goa.