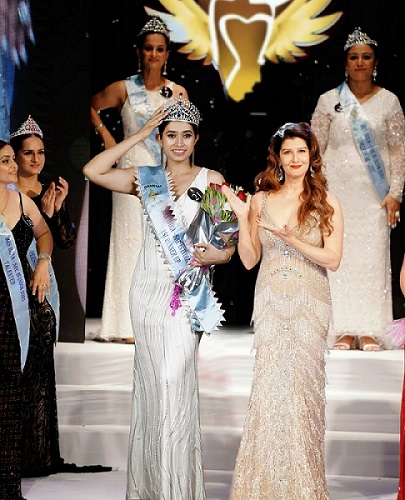 NewswireOnline:- In the most credible pageant for married women, Amrita Tripathi, who is a physiotherapist, hospital administrator, and now an entrepreneur from Bhopal, has won the title on 21st August 2021. The event was held at Hotel Hyatt Regency, Gurgaon, from August 17 to 22nd in 6 days of sparkling competitions and excitement among 24 finalists from all over India. The contestants got into the pageant after winning the state-wise hunt throughout the country. Amrita has also won the prestigious subtitle of “beauty with substance”.

Born and brought up in a small town of MP, Chhatarpur, she did her graduation from the city of lakes, Bhopal, and got married there only. Amrita Tripathi is a girl of ambition and dreams who dreamed not just for her but for the whole womanhood. Her bold stands for women’s rights and work to prevent domestic violence have got widespread attention on the pageant, making her stand out from the crowd. She always wondered, “Why to limit women with marriage” As per her, this title is not just a matter of glamour, but she takes it as an opportunity to bring awareness to society about domestic violence. She also hopes that the crown will help her to take forward the mission of helping the victims of domestic violence nationwide. Her bold and big ambition to change the plight of women in the country is appreciable and needs the strong support of people to fulfill it.

Amrita Tripathi was also the only contestant who bravely used Hindi in the pageant. She proved language is not a barricade for achievements and inspired millions of girls for the same. Her brave and beautiful move attracted everyone. Amrita Tripathi’s attitude towards life and her way of presenting herself was famous even before the pageant. As a female, committed towards family and society, Mrs. India pageant gave her the opportunity to display her charming talents. Amrita Tripathi is a promise for future India, who has a lot of potential in her.

Amrita also wants to share that men should support the dreams of every woman they have in their lives, be it their wife, sister, daughter, or daughter-in-law. Amrita, who lives in a big joint family, is thankful to her Late mother-in-law, her father-in-law, and her sisters-in-laws for supporting her to achieve bigger in an international platform. Her husband, Mr. Rohit Tripathi, and her son Sarvagya were the pillar of support throughout the new journey of her life who have always encouraged her positively.

‘Mrs. India – She is India’ is a platform for women to express themselves, irrespective of their marital status. The pageant brings together women from all walks of life and encourages them to rise to high goals. This is an exceptional opportunity for modern-day Indian women to showcase their talents before the world. This female empowerment program offers a life-changing phase for the participants and provides them with international platforms further.