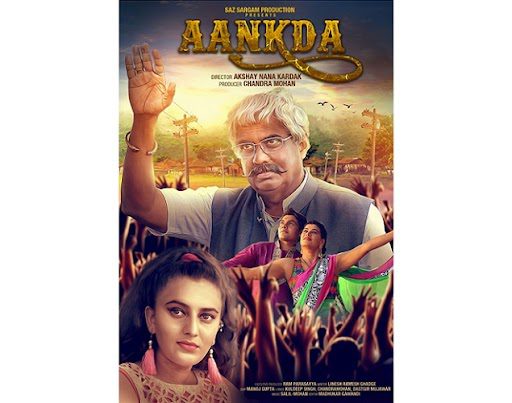 New Hindi Movie ‘Aankda’ is a dark comedy story in the conceptual Muftpur village of UP. The movie is based on the habits of the villagers to get free electricity by connecting a wire fraudulently to the overhead cables by a bamboo stick called KATIYA. Government officers are taking every care to stop this practice. Dark Comedy of fraudulent villagers with UP-style item songs, and a typical Pradhanji-making politics are the main attractions of the movie

Few good people like a school teacher and some young boys and girls oppose this KATIYA practice. Sajjan is the right hand of Pradhanji, while Jagan and others are criminals in the village. Pradhanji of the village is glorifying the KATIYA by making it a GODDESS by building a temple and worship it. The Arti of Goddess Katiya is a nice comedy song. Coincidently Pradhan’s charming daughter is also named as Katiya. Katiya tries to flirt Sanju. Sanju, a sincere student gets selected in UPSC for IAS and the fight against Pradhanji and KATIYA practice becomes easy.

Theft of electricity is a major problem in all the corners of India. People feel that they must get free electricity. The losses in such electricity are to be borne by the bill payers and the income tax payers.

The Bollywood movie Aankda talks about the dangers in theft by KATIYA practice. People in Maharashtra call it as Aankda, meaning a hook to attach the wire to the overhead cable.

Producer Chandramohan and Director Akshay Kardak are trying to release the movie in UP, BIHAR, Uttarakhand, and Delhi in the coming November. Writer of the film is Linesh Ghadge. Actress Simmi Dixit is from Lucknow while Vijay Kumar is from Delhi. Pradhanji is cast by Ulhas Adhav while the school teacher is Ravi Deodhar. DoP of the movie is Manoj Gupta. Lyrics are written by Kuldip Singh, Dastgir Mujawar, and Chandramohan, and the music is composed by Salil Mohan. The songs are specifically written with the context of electric current and Katiya. The love song “Tu Bijli ka Taar hai, Main Aankda hun” is like a reply to the Tony Kakkar’s hit song, “BIJLI KA TAAR”.  The song will break the record of Tony Kakkar.

Saz Sargam Production expects that such Muftpur villages will get rid of Katiya practice and will be converted to Vikaspur.

“I Want To Be A Part Of Meaningful Films That Leave A Positive Impact On The Society”, Says Undertaker Actress Vanshika Gupta